So I booked two different tour days for us to see as much as we possibly could while in Thailand.  I already knew I wanted to go see the ruins of Ayutthaya because they looked amazing in pictures, and Mortal Combat 2 was filmed at one of the temples.  Okay, the fact that Mortal Combat 2 was filmed there actually didn't cross my mind, our tour guide told us.  :)  Anyway, I had been searching around online to figure out how we wanted to do the tours and I ended up booking our tours through a company called Bangkok Day Tours, and it was great.  We ended up paying more than we would with other tour companies but these guys have their act together and in the end I was so happy we booked with them.

The morning of the tour, we got up at 5:45am because we had a pick up time of 7am and I wanted to eat breakfast before we left.  The ruins were 2 hours away from the hotel so I didn't want my stomach to rumble on the way.  It was rough getting up that first morning, but we ended up having a wonderful day.

We were picked up in a really nice SUV with our own driver and separate tour guide who spoke great english.  It was really swanky.  I felt pretty important.  Our guide, Morgan told us about Bangkok and it's full name which is actually a poem.  It's seriously long.  And then he told us about the places we were going and gave us a little back ground information about the places.  For instance, did you know that the king in the musical "The King and I" was the King of Siam who had the main temples in Ayutthaya built?  Neither did I.  AND that he had them built after he'd been to Angkor Wat in Cambodia because he wanted to move Angkor Wat to Thailand but that would have been way too hard.  AND the story that's carved on the outside of Angkor Wat is painted on the interior walls of the Grand Palace in Bangkok.  So pretty much, Thailand stole everything from Cambodia.  :)

We went to Lop Buri first, which ruins wise turned out to be a little disappointing because it's really just one ruins area in the middle of a little town.  We mostly went there because I'd read about the......monkeys!  There are monkeys all over the place up there!  There's fencing across people's windows and rooftops to keep the monkeys out and every year there's a monkey festival. If you look at the pictures Bob took while we were there you will see that he cared nothing for the ruins and only loved the monkeys.  I'm sure you've all seen the pictures but I ended up with 6 of the monkeys on me.  They tried to take my earrings and sunglasses. 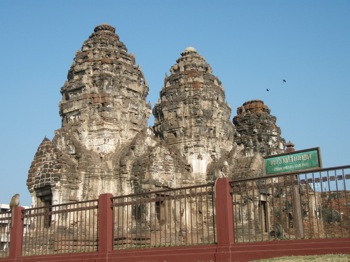 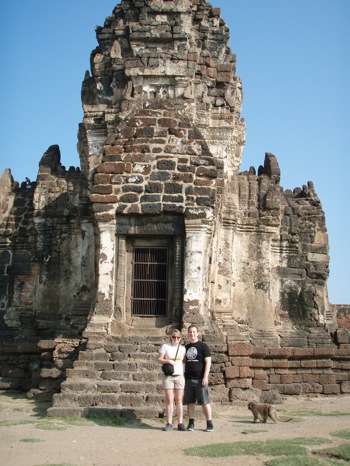 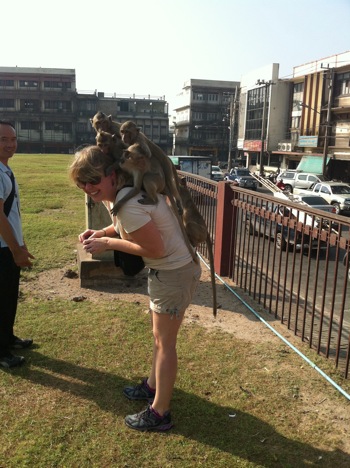 We didn't spend too long at Lop Buri, but it was fun to see and play with the monkeys.  After that we headed towards some of the smaller temples of Ayutthaya and to see the reclining Buddha, which is huge! 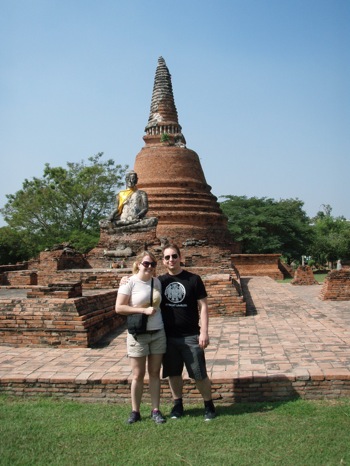 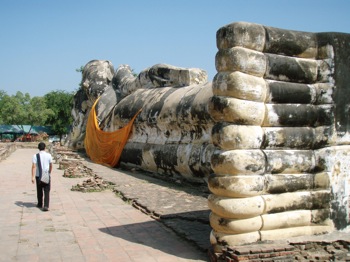 Bob bought us an offering to give to the Buddha: 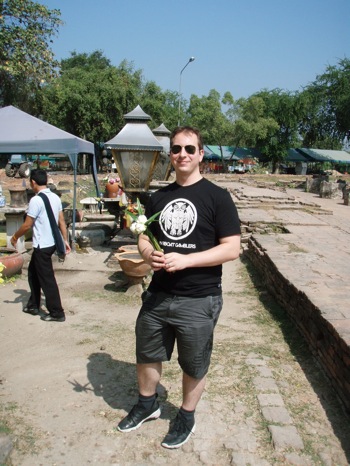 I'm showing you where I rubbed the gold foil on the Buddha: 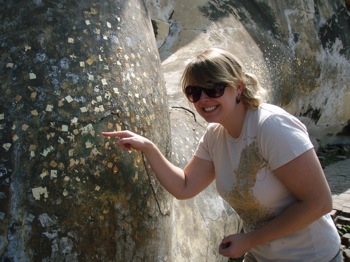 We saw a bunch of different smaller temples around the area, and you can check out all my pictures in the Lop Buri and Ayutthaya Album on my Facebook page or in my Flickr account.  There are just way too many to put in the blog.  I was taking pictures of everything.

At about noon Morgan, our guide took us to a local restaurant before we hit the big temple area of Ayutthaya.  The restaurant was right on the river and it was pretty good.  We had told Morgan we liked spicy and it was good.  We had a collection of different Thai dishes with rice and enjoyed some lemonade as we looked out at the water.  We were really hungry by then so it was a good thing it was time for lunch.  Morgan and the driver ate at another table and when we were ready we continued on our adventure.  We went directly to the big ruins area, which his really impressive, go here if you go to Thailand, you'll be blown away. 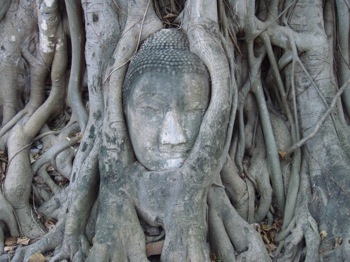 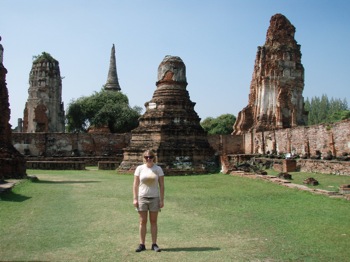 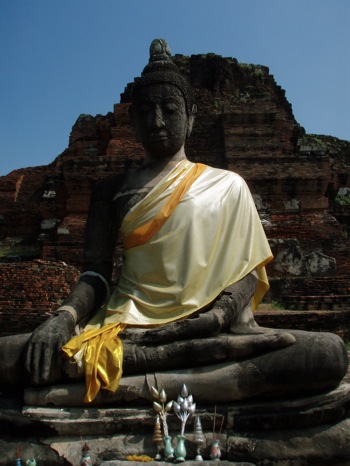 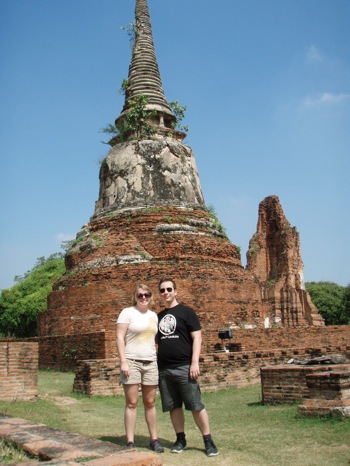 We then headed off to a temple area that had been partially reconstructed to show people what the ruins would have looked like before being burned and attacked. 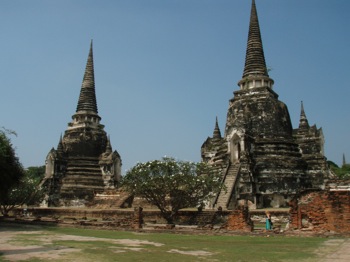 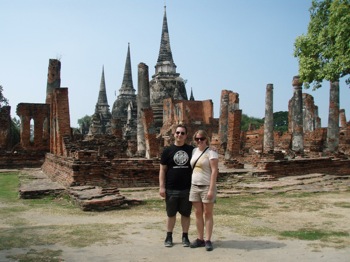 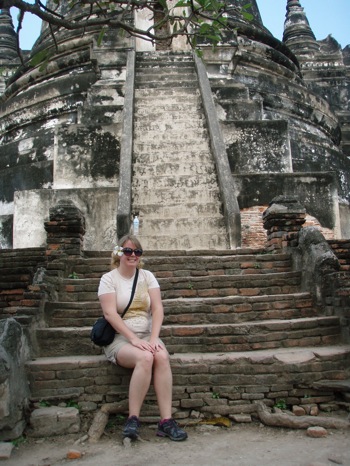 And to a more modern temple next to a little market area. 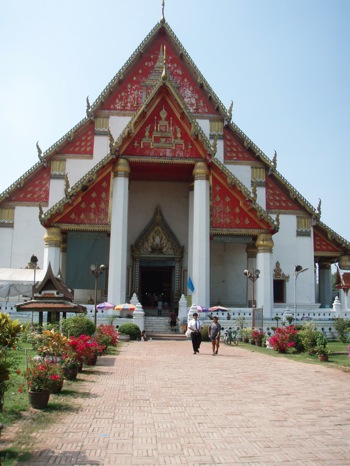 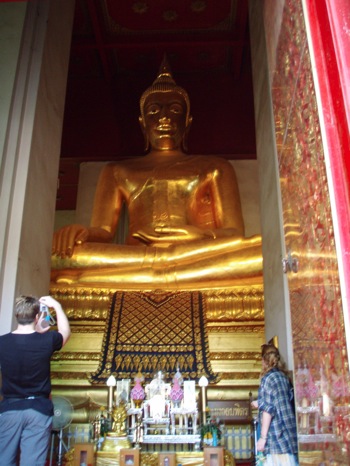 At the end of the day we had local Thai iced coffee and were interviewed by a group of girls who are studying tourism.  They were really nice, but super shy. 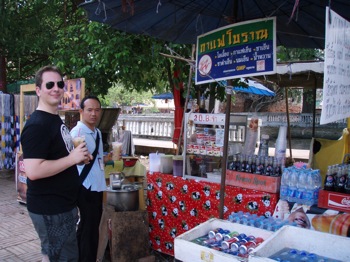 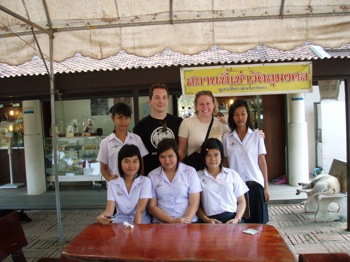 We then hopped back in our swanky car and headed back on the 2 hour journey to Bangkok.  We were tired and I did the head nod the entire way.  We got back around 3pm and promptly hopped in the shower because we were really gross.  I then took a little nap while Bob worked :)  and then we prepared to head out for the evening.

We were going to go to Pepper Lunch, this awesome Japanese chain that Bob really likes but the traffic was horrendous and the cab driver we got suggested he take us some place else, which turned out to be some of the best food we ate in Thailand.  I'm so glad we listened to him.  We ate at the New CosmoThai Seafood restaurant and it was really good.  The TomYum soup was extra spicy with really good shrimp and peppers in it.  We also ordered more morning glory because Jason got us hooked, and a couple of other dishes.  (There will be a write up in the food blog.)  It was really really good.

After dinner we walked across the street to a night market to check out the goods and we got some fun things.  Just a couple of t-shirts and some earrings.  It was mostly fun just to look around.  We headed back to the hotel exhausted from our long day and ready for bed.