Monkeys and Tigers and Thailand, oh my! (Thailand Day 1 and 2)

OMG, I loved Bangkok.  Bob and I have already decided we must go back.  We had such a wonderful time, saw beautiful places and ate amazingly delicious food.  We're already talking about when we could go back and check out the beach because this trip was entirely a city trip.  I had thought about splitting our time between the city and one of beaches but decided that because we'd never been to Bangkok before that we should just do the city.  I found a nice hotel called "Dream Bangkok" which had great reviews and was very reasonably priced so we stayed there the entire time.  The hotel was very boutique frou-frou.  There was neon blue lighting everywhere and weird mirror collages, along with fun fountains and some traditional Thai decor.  As much as I liked our hotel I would stay closer to the big malls in the city, or in the financial district area in the future just because it seemed a little more exciting and accessible. 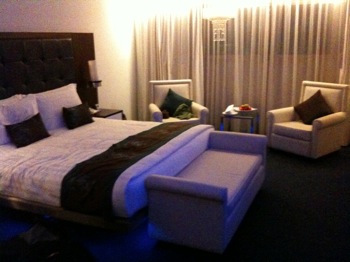 The awesome statue in our hotel room: 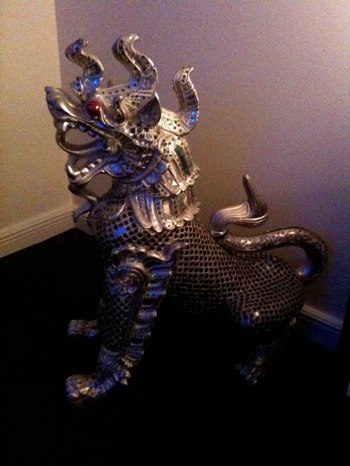 We got to ride in a bright pink taxi to the hotel.  There are some crazy colors on the road, and there are a bunch of pink taxis.  I know I was quite excited about this. 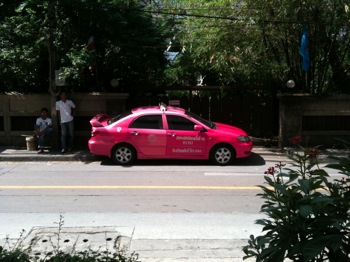 Our first night in Bangkok we checked into the hotel and then went for a little walk to find dinner.  We ended up eating some really good vegetarian Indian food at a place called the Dosa King.  I'd actually never had a dosa before so I had no idea what it was but figured it would be delish because most Indian food is.  We ordered way to much food but it was all really good and spicy.  After dinner we did a little wandering around and then headed back to the hotel to finish settling in. 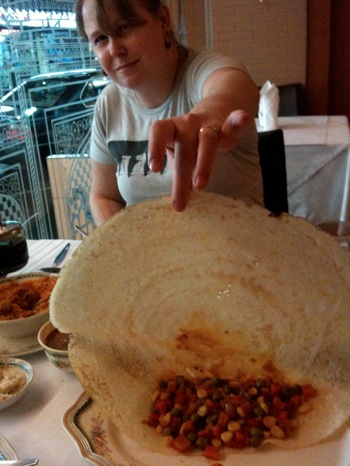 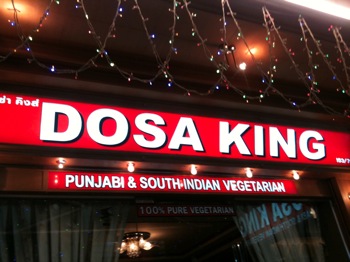 The next day we did some wandering.  We knew there was a big shopping area down the street from our hotel, we just didn't realize how far down the street it was.  It ended up being quite a ways away from us.  We started walking in that general directions and stopped at a little mall to get something to drink because we were melting our faces off, and ended up finding the world's (yes, the world's) most amazing grocery store.  I kid you not, this was like the ultimate grocery shopping experience.  Imagine if Whole Foods, Trader Joe's and whatever grocery store you like the best merged together to create the ultimate shopping experience, well this would be it.  They had an olive oil sections where there were casks of olive oil you could choose from and they'd fill pretty little bottles for you.  There were all kinds of cheeses, and a ridiculous assortment of fruits from everywhere.  We were blown away, we could have lived in that grocery store.  AND to top it off there was a food court area, but all the food was prepared fresh right there for you.  While we didn't eat any real food there, we did have some really delicious frozen yogurt.  This isn't the frozen yogurt you get in the states, nope not this. This was truly yogurt that was frozen.  The place is called Buddhi Belly and we instantly fell in love with it.  We liked it so much that we sought it out a second time during the trip.  (I love the logo.) 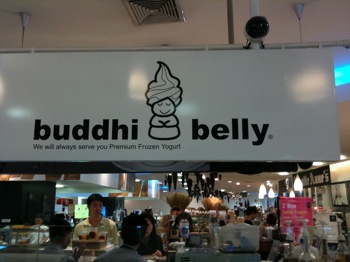 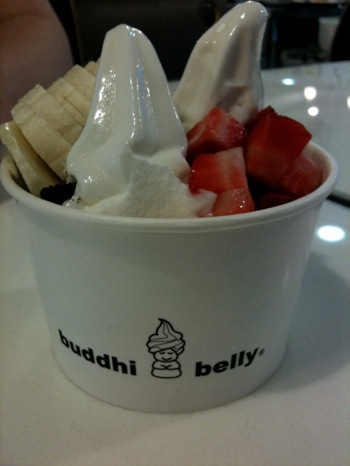 After our yummy treat we continued our walking adventure and while getting ready to cross a street, I made the mistake of pulling out my map.  I knew where we were but I wanted to check to see how many more streets we would be crossing to get to our destination.  While standing there with my map a nice Thai gentleman came over to help us, because he assumed we were lost.  As I was holding the map, he reach out to hold the map with me, and then he wouldn't let go.  Even after he showed us where we were, and I thanked him and tugged on the map a little he would not let go.  Instead, we got his life story and his brother's life story.  He's a high school teacher in Bangkok, and he's enjoying the holiday (it was a water god holiday) and his brother was really smart and the government had paid for his brother to go to college in California, but now his brother is retired, but he use to be a teacher too.  See, I told you, life story.  Anyway, we also found out from him that there was a place having a huge sale on jewelry.  He made it sound like a market, and I love markets so Bob and I decided to go.  We hopped in a Tuk-Tuk (a little open air cad, kind of like a golf cart with a driver) and headed over to where the gentleman said the sale was.  Sadly it was just a store full of old woman jewelry so we didn't buy anything.

We walked around for a bit more and saw some people playing a sport that looks like volleyball but with your feet, called Sepak Takraw, it was really bizarre.  And we were harassed by about a million Tuk-Tuk drivers who wanted to give us a ride.  Thailand is all about the hard sale, they will follow you for blocks.  I did get an awesome picture of a line of Tuk-Tuks though. 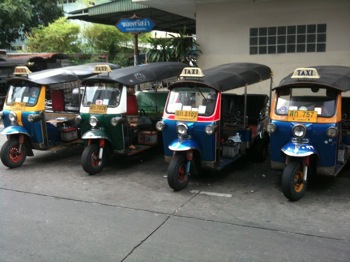 We eventually took the sky train back to the hotel to cool down and freshen up before meeting up with our new friend Jason for dinner.  Jason was introduced to Bob via Twitter.  Jason has lived in Bangkok for eight years and currently works for CouchOne.  We'd never met him before but he was super awesome!  He took us to this local place on the outskirts of Bangkok and we had TomYum soup, and this great fried chicken, and steamed morning glory, which is delicious by the way.  And because it was the water god holiday there were people out all over the city sending paper lanterns up into the sky, it was pretty cool.  Unfortunately there aren't any pictures because it was so dark, but it was really neat.  We had a wonderful meal and then Jason helped us get back to our hotel so we could get to bed early because we had a tour booked the next day.