Fun in Beijing with Jay and Staci!

Day 1 - We arrived in Beijing in the afternoon, and I had booked us an awesome suit at the 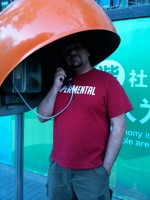 Joy City Hotel near the Xidan metro stop.  It was pretty much the most perfect location ever because we were right where two main metro lines crossed so we could easily get everywhere we wanted to go, and Bob could easily get to his conference.

The hotel is attached to a gigantic mall so we had lunch in the mall at a Korean place.  Mmmm, I had delicious kimchi bibimbop.  I love kimichi.  After lunch Bob had to go to meetings so Jay, Staci and I wandered about.  We of course shopped the mall first, and then we decided to go to Tiananmen Square.  I originally tried to lead us in the wrong direction because I continue to forget to buy an actual map for Beijing, so I got us around based on land marks.

We made it to Tiananmen Square, which is right across the street from the Forbidden City, just as the flag ceremony to take the flag down for the day was happening.  There was a huge group of people, and we didn't really know what was going on until we asked.  The guards seriously stop traffic to march across the street, perform the ceremony and then march back.   And we also discovered that after the flag ceremony Tiananmen Square is closed for the rest of the evening.  Who knew you could close a square, I sure didn't. 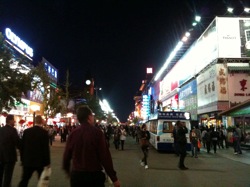 I decided that that first night would be the night we would go to Hai Di Lao, the best Hot Pot Place EVER!!!  So I texted Bob to meet us there and we meandered that way.  We walked along the big shopping street, I was accosted by a dirty dude who slapped me in the chest.  It was kind of shocking and I yelled at him.  It's okay, in the end dinner made everything better.

Day 2- Bob had to work on his talk because he hadn't already finished it for the conference, (Can you hear the annoyance in my voice?)  so Staci, Jay and I went to the Great Wall with out him.  I hired a private driver after searching the online Beijing Classified and we were driven in a nice van to the Wall.  We decided we wanted to ride to the top and then take the toboggan down.  That's right, as I think I've mentioned before, there's a toboggan off the Great Wall!!!!  And the day was absolutely beautiful.  We chose to do the shorter, but steeper climb, and on the way Staci and I bought some lovely communist hats from a guy selling goods on the wall.  He wanted 40RMB per hat but I put up a fight and we got two hats for 40RMB.  Yes, that's how I roll. At the end of our climb we enjoyed a nice cold beer on some of the steps of the Great Wall and then prepared for our toboggan ride down.  If you ever have a chance to do this, I highly recommend it, it was so much fun!  The ride lasts about 4 minutes and you control the speed of the little car you're in.  It was a lot of fun, we joked about going back up the wall just so we could do it again, and to be honest, I totally would have done that.  After all the fun we all took a nap on the ride back into the city, it's about a 2 hour drive, so we were plenty rested by the time we got back. 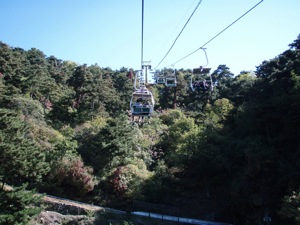 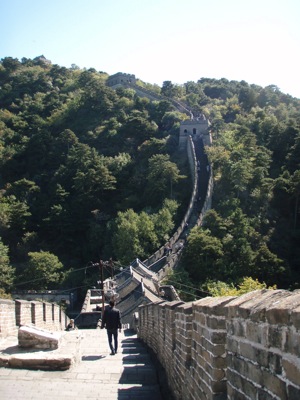 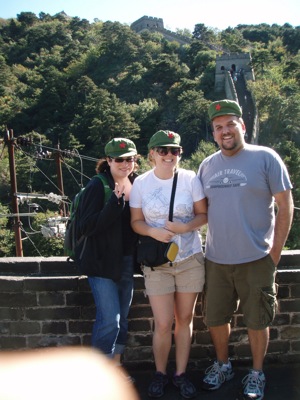 Bob was waiting for us and then we were going to go grab dinner.  Jay, Staci and I got cleaned up and we ended up eating Taiwanese at The Bellagio chain.  It's really good food, the dumplings were extra good, at least I thought so.  After dinner we headed out to what will now be referred to as our place in Beijing, Tim's Texas BBQ!  We went for live music and drinks, and we were not disappointed.  We stopped along the way at The Place, the giant outdoor mall where there's a giant LED screen on a pavilion ceiling like on the old strip in Vegas.  We enjoyed lots of drinks and ridiculous that night and the next morning Staci and I were feeling it.  Okay, I was feeling it...that's what happens when you have too many margaritas. 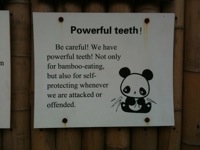 lazy.  We did make it to the Beijing Zoo.  The zoo was....interesting.  I don't feel like it was terrible but I've definitely seen better zoos.  I think some of the animals were fake.  Or they were really really tired.  Staci and I also had an experience at the zoo that I think we'll both remember for the rest of our lives.  We were walking along, tra-la-la-la-la, by the Panda exhibit and there was a woman and her son walking towards us, and he looked like he was about ten.  And at about the same time both Staci and I realized that his (to put this delicately) bits-and-pieces were hanging out of the top of his pants.  Call us perverts but I think we'll remember that forever because we were kind of shocked.  We did get over our shock long enough for me to try to climb on top of a turtle statue.  It was HUGE!  I slid off it the first time I was trying to get on top for a picture and there were a bunch of people watching me. :)  I did eventually make it on top.  Sadly I don't have the picture...I believe Staci does somewhere.

We also got to see Penguins up close and personal: 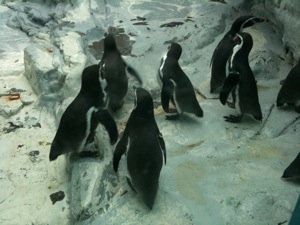 After the Zoo we headed back to the hotel to meet up with Bob and Jay for Peking Duck at a place that many people had recommended.  It was very good, and I had a wonderful mushroom soup. 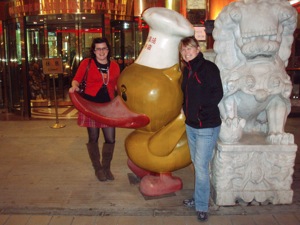 Day 4- Our last day in Beijing we had a magnificently huge brunch at the Westin Hotel.  There was everything you could want and more, plus free flowing champagne.  We ate sooo much food.  It was excellent, and I think we're going to try the Westin brunch in Shanghai some time.

After brunch we went to the Temple of Heaven, which was pretty neat.  I actually recommend it over the Forbidden City.  I think the architecture is more varying and more interesting to look at.  Of course go to both if you have the time.  Anyway, we got to the big park that surrounds the Temple of Heaven and there was a large group of people just hanging out and dancing so we stopped and watched them for a little bit.  Then we meandered through the Temple of Heaven. 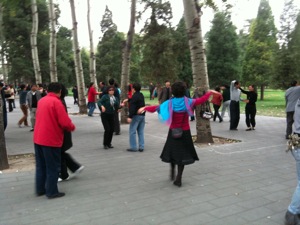 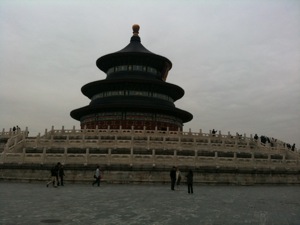 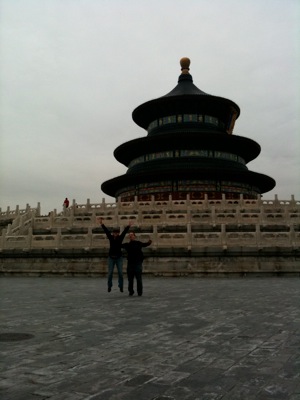 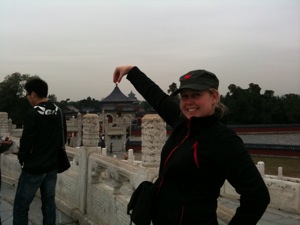 It was an excellent end to a fun and fast trip in Beijing.  We headed back to the hotel to pick up our things and then caught a cab to the airport.  We experienced a very interesting situation upon our return to Shanghai.  Our friend Eric had arranged for a driver to pick us up at the airport and we spent half and hour searching for where the guy had parked the car.  We eventually made it home....in a cab. :)

I know this was a fast and furious tale of Beijing but I wanted to push this out fast so I can catch up on life in Shanghai.