﻿Before I get to Pub Quiz.....I've taken to going into the office in the afternoon on Mondays, Wednesdays and Fridays.  I show up at lunch time and we get a bite to eat and then I go into the office for the rest of the day.  It's nice because I definitely am better about working at the office than I am at home, but I don't have to get up early :)  We've designated Mondays as "Master Kong" Day.  It's an excellent noodle bar, and we order the spiciest dish, although this week we branched out and tried something new...but it wasn't as good.  It wasn't bad, but I think we'll stick with #116, it's delicious.

This is what it looks like when I ride the metro into work: 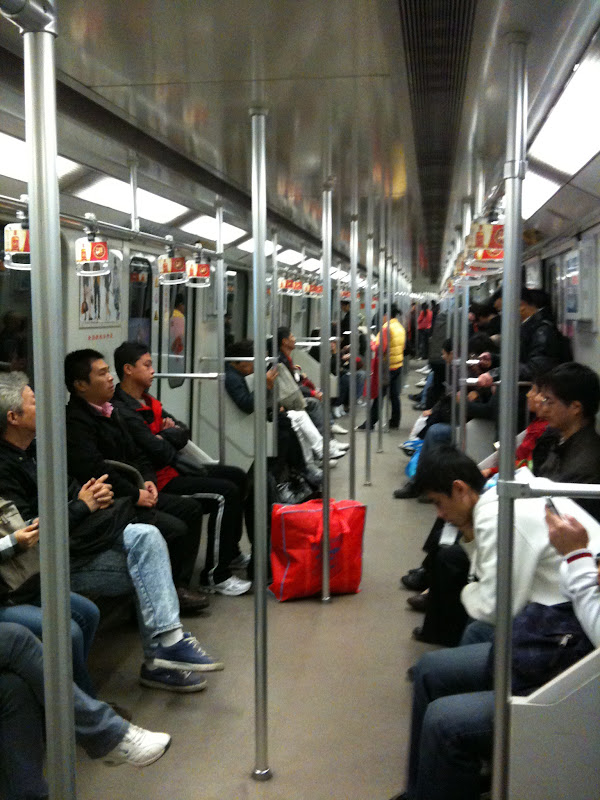 I was able to work pretty swiftly through the support queue, and had time to mess around and play some games.  I went in search of educational games, sadly most of the ones submitted to the system that are called educational are actually coloring games.  I did find a typing game I liked as well as a math game, but that was pretty much it.  And then, time flew by and it was time to go home and get ready for.....dinner and Pub Quiz!!!!

We went to a Teppanyaki place just around the corner from the Pub, called Natural Point, and it was very good.  We did set courses because we'd never been before but I think we're going to go back and order whatever we want off the menu next time.   We mostly don't want to do the set again because there are things we could do with out, everything was good, but some things are always better than others, for instance....I didn't really need miso soup or a small dinner salad.  We at a lot of food, I got mushroom and asparagus beef wraps, and Bob had two different kinds of steak, one with bone still attached and the other delicious, yes that means that the bone in weren't as good.  :)  There was a small sushi plate, and it was good, it had some salmon, tuna and I'm not sure what the third was, but it was lemony and good.

Dinner was really filling and pretty cheap considering how much food we had.  It worked out being about $20USD a piece and we each had: a dinner salad, miso soup, a sushi plate, a main course with veggies, and fried rice plus a beer and green tea.  And the portions were excellent, we'll definitely be going back.  We thought about having dessert, but were too full to even consider it, so we headed off to the Pub to grab a good table for the quiz.

The run-down on the quiz -

We have "our" table at Bulldog now for Pub Quiz, it's in a pretty good spot so we can see everything easily.  I call it our table because we've sat at it every time for the last 4 Pub Quizzes.  So, Monday was the first time in a while that Bob and I had been on our own at Pub Quiz and we really wanted to do Jay proud so we'd actually read through CNN earlier that day at work so we could catch up on the news.  Sadly, that did not help us with the current affairs section of the Quiz.  Did you know that in Mumbai, India they removed all the coconuts from the tress for Obama's visit?  Neither did I, and if you did know that, why?  We apparently suck at getting updated when it comes to current affairs.

The second round was a little better, it was all about famous horses.  Everyone will be pleased to know that we were able to identify Mr. Ed, however, that was the only one, so we 1 of 6 points in that round.  Terrible, I know.  We did get a little better in the next round.  The Quiz Master would show us a picture from a movie and we had to say who the movie star was, the artist they were portraying and the name of the film.  We were able to get most of those, thank goodness I like movies and art.

And then we sucked terribly with the next category, we officially cannot identify the flags of Central America to save our lives.  We didn't get a single one right. But we made up for it in the next round when we had to identify mythical creatures.  Thank you Mamacita and my recent reading of The Percy Jackson Series.  (Which I highly recommend by the way if you haven't read it.)

The next section kicked our butt's hard!  It was "Political Leaders."  We had to name the leader and the country they were from, and we were terrible at this.  We got the guy from Mexico right because Bob recognized the flag, and Daddy, you'll be so proud because I got Mugabe from Zimbabwe right!  To be completely fair and not at all politically correct, I figured it was worth guessing Mugabe and Zimbabwe because I didn't know anyone else.  But hey, that was 2 points for us!  WOO-HOO!

And I totally rocked the "Guess Who/What I Am,"  even Bob was impressed with my deductive reasoning.  So the first clue was "I was re-discovered in 1799 by a frenchman." (We had no idea what it was at this point.)  The second clue was, "I'm displayed at the British Museum."  (I thought, okay, statue or something.)  Third clue was, "I'm carved out of black granite, (and then there were it's dimensions)." And I said, Rosetta Stone!  But Bob made me wait for the next clue which was about Egypt.  :)  So we got 6 points, but 1 point wouldn't have made much of a difference, but I did feel like a genius.

We did okay on the usual Film Quote rounds, and the finish the lyrics rounds, and then the music round kicked our butts.  It was very sad.  Finally we got to the jeopardy round where we could bet points and we bet all our points except one, just in case everyone did the same and we all got it wrong.  The category for the evening was "Fashion and History."  The question was " Which Fashion and Lifestyle House created the Nazi uniforms?"  We had no idea, but we will now never forget that it was Hugo Boss.  In the end we ranked 5th place out of 9 teams.  Sad for us, but there's always next week!

We're getting smarter every time we attend Pub Quiz!  Woot!