The rest of October was a blur...

After our trip to Beijing, Staci had to abandon us for lovely San Francisco.  I tried to convince her to stay and be my professional best friend here, but alas she had to go home.  We still had a lot of fun, but I think it would have been even more fun had she been able to stay the whole time Jay was here.  (Not to say that I didn't love having Jay, because I did.)

Anyway, we started off right by winning the Pub Quiz at our new favorite English Pub, The BullDog.  We rocked it and won 1,000RMB worth of drink tickets.  Sadly our luck didn't keep up and we progressively got worse on the following Mondays.  I need to read the news more, maybe that would help. 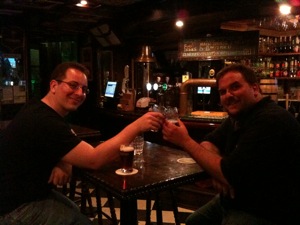 There was a lot of eating and drinking and staying up for all hours of the night.  We hit our main favorite places:  Gourmet Cafe, Pizza Marzano, Nepali Kitchen, 131, Boxing Cat, and even had a chance to check out New Heights.  I'd been wanting to check out New Heights for dinner because we always take people there for drinks and a beautiful view of the city.  The food was good but the service was crap, so we will likely not go back.  I guess we'll have to try one of the other restaurants in the Bund.  I was going to post about it on the food blog, but it just wasn't worth a write up, but I'm going to try to get back into updating the food blog and linking it here.  :)

We did have a couple of stand out nights.  We went to Muse on the Park, which is a club located in the middle of a park, to see the fake Lady GaGa show.  I got all dolled up in my best crazy lady outfit that I could put together which was more rock-a-billy than anything else.  I even bought the weird giant doll eyes contact lenses, which are crazy awesome!  I don't wear contacts so it was awkward putting them in, but I managed it.  I ended up not wearing the doll contacts to the show because I was afraid my eyes would be sad the next day.  The show itself was only so-so, not nearly what I had been expecting but I still had a good time.  We played some liar's dice, and ordered a bunch of whiskey and green tea, and danced our butts off.  That night ended at 4:30am, and then Bob and Jay stayed up to watch the sun come up on the balcony while I went to bed.  They're so in love.

Here's a close up of the crazy contacts: 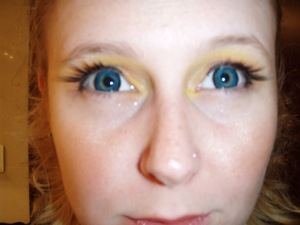 And my rock-a-billy hair: 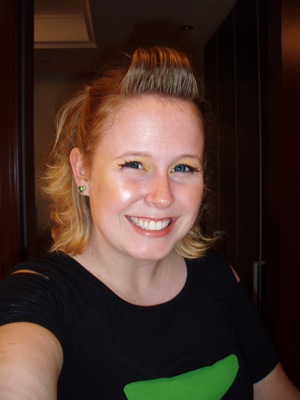 The other night that stands out in my mind was when we all went out to KTV with Patrick, Yoko, Key, Agnes, Eric and Sean.  KTV is the karaoke place, it's actually called CashBox/PartyWorld and we had our own room and sang our butts off.  I have videos of the evening; however, I've been threatened with death if I post them.  Here are a couple of pictures of the night though. 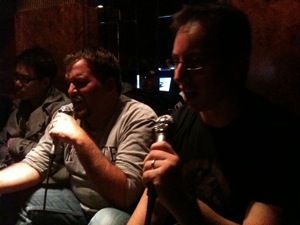 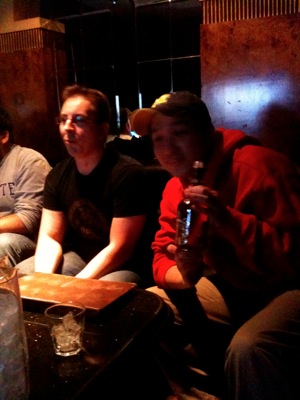 That evening ended at about 4am as well, when we were asked to leave because they were closing for the night.  Here's the damage we inflicted: 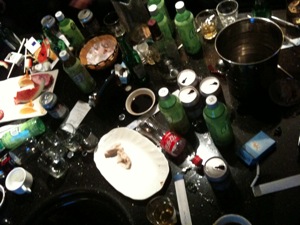 Sadly we didn't dress up for Halloween.  Bob and Jay will tell you they both told me they'd dress up but I had to get costumes, and to be honest that's not as fun.  I wanted them to be more excited about Halloween.  We ended up just having a lazy day instead because the night before had been the karaoke crazy night.  There's always next year I guess.

We had Jay for the rest of the week and we'd started to slow down on our nights out because we were exhausted.  Having Jay, and Staci was awesome because we just kept going and going and trying new things, plus I think Bob has more fun when his boyfriend is in town. :)