A little bit about Bangkok before I continue our adventures.  I was really blown away by how international the city is, I know Shanghai is international, but not in the same way Bangkok is.  Bob thinks this is because there are so many restrictions in China.  I never once felt like not speaking Thai held me back in Bangkok while we were roaming about, everything was in multiple languages, even out in the boonies.  And everyone smiles and is polite and helpful, I was amazed by the huge difference between Shanghai and Bangkok.  While Shanghai is definitely more metropolitan, Bangkok is by far the friendlier city. At the same time I did notice that when selling things in Bangkok the sell is much harder as opposed to Shanghai, or Beijing for that matter.  In China when I say "no," that's pretty much it, and I walk away.  In Bangkok I would say "no," and then be followed for a block while they tried to change my mind.  It was exhausting.  It's hard staying friendly after having to tell a tuk-tuk driver 4 times that you really don't want a ride and are walking to your destination, and that no, the price doesn't make a difference.  I do recommend Bangkok to everyone though, it really is an amazing city, and you can get anything you want, for a "special price friend."

On Tuesday, November 23rd, we ended up participating in an afternoon cruise because I had thought the cruise would be different than it turned out to be.  It was a Rice Barge Cruise up the river past the main temple and the grand palace.  The first half of the tour was on a speed boat and the second half was on a rice barge.  From the description I had assumed the reason we changed boats was so that we could go down the smaller canals and see side water alleys of Bangkok, but that wasn't the case.  We took a nice ride up the river past all the sites and then transferred to the rice barge on the way back and had cocktails and fruit.  So we went past the same places twice, but the tour was cheap and it was nice day.  We got to feed some gigantic fish while on the tour as well.  I think all the tourists get to feed the fish outside of the sacred temple areas, because they were enormous.  You're not allowed to kill the fish right outside the temple, which accounts for the number of them and their size.

There were some nice women out on the water selling little knick-knacks, and I'm sure they make a great living because I know I bought stuff as did a few other people on the tour and there are a few tours a day.  It's neat though because they're in their own little boats that pull up along the side of the boat. 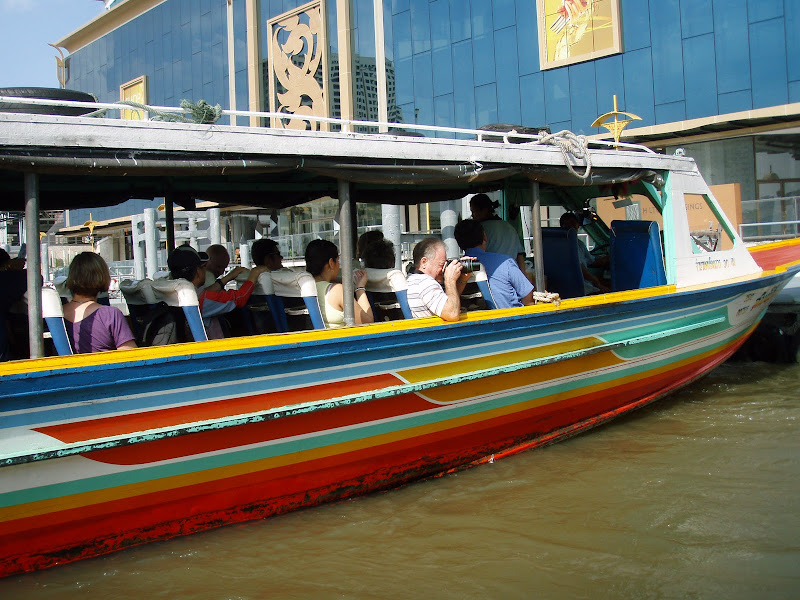 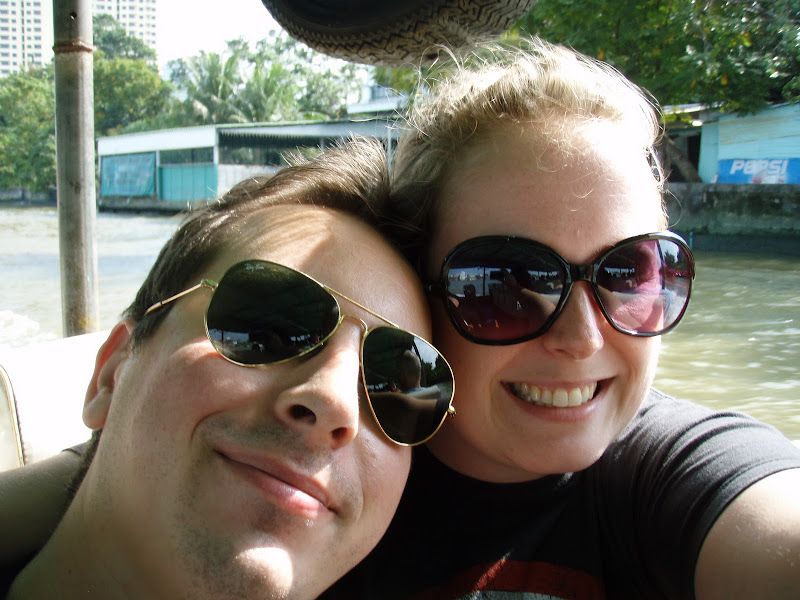 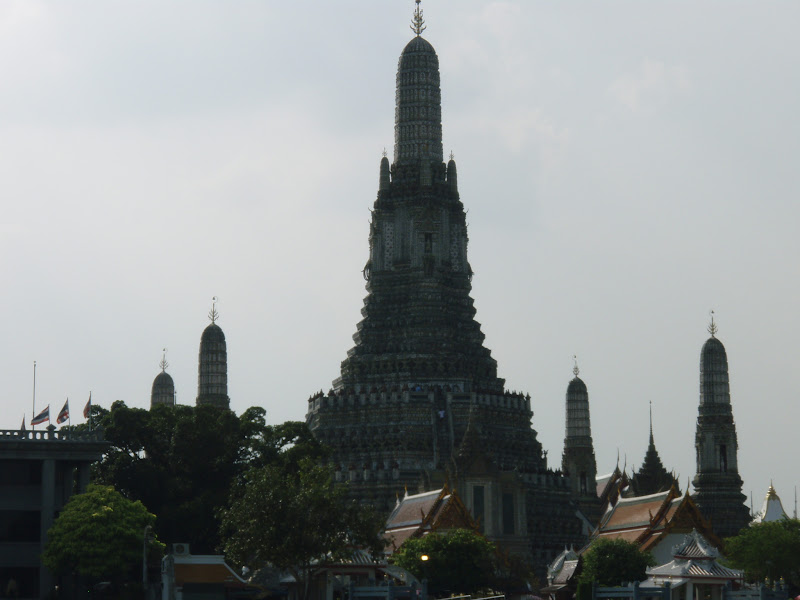 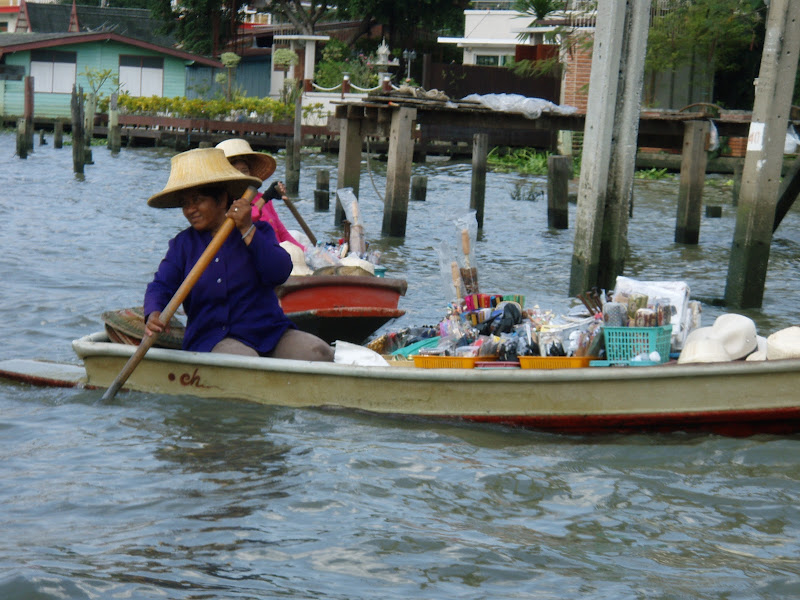 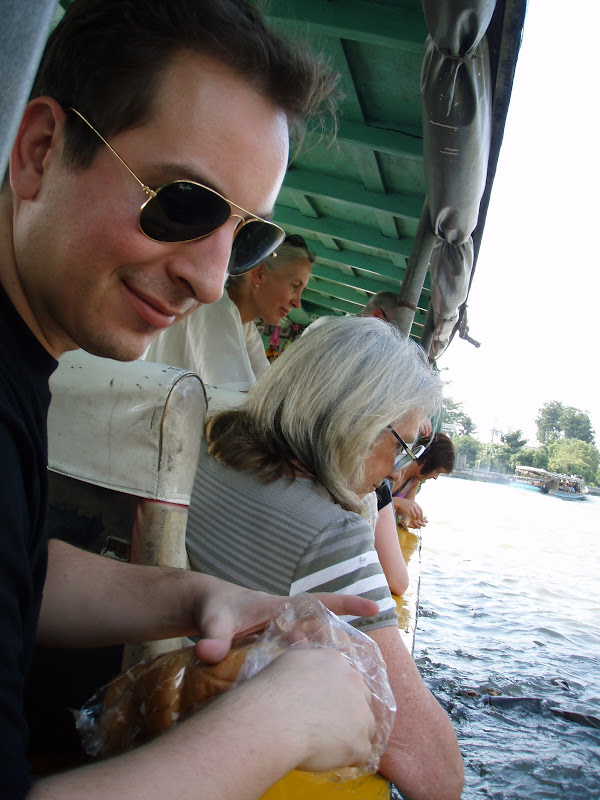 We also learned on the tour that in Thailand there are different colors associated with each day of the week, which accounts for all the colors everywhere.  For instance if you're born on Sunday the color is Yellow, and Monday is red, I think, I don't remember completely, but each day is a color of the rainbow and you're encouraged to wear the day's color on the day.  I thought that was pretty cool.

This was an offering outside the boat terminal: 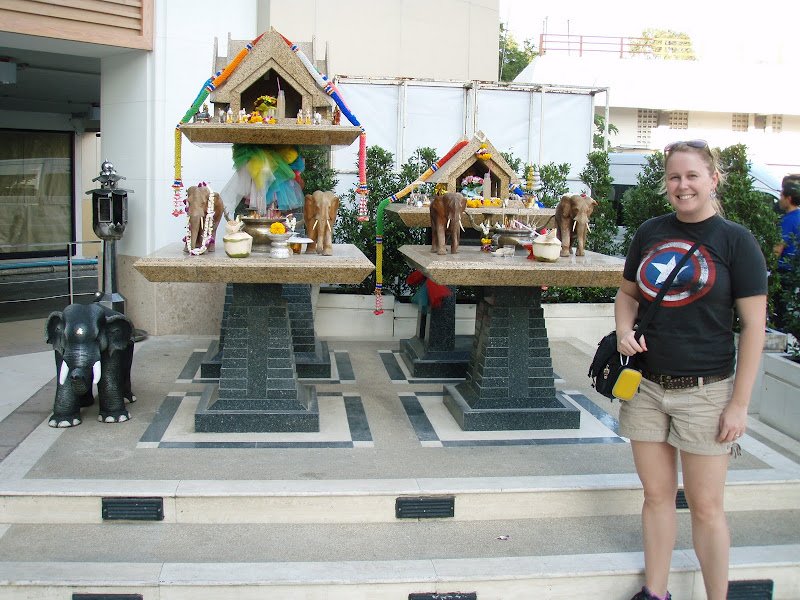 After our boat tour we headed back to the hotel and decided it was time to try a Thai Massage.  We had a quick dinner at the hotel which was good, but nothing spectacular and then headed for our Thai Massage.  For anyone who knows the comedian Eddie Izzard, and his sketch about chiropractors, this is what Thai Massage is like.  There was seriously a part when this little Thai man said to me, as I'm lying on my stomach, "hold my hands" and then he pulled me backwards.  I thought my arms were going to be ripped from their sockets.  It was intense.  If you like elbows in your back, and being stretched to your limits I highly recommend the Thai Massage.  I liked most of it but I think I might have hurt more after leaving. :P  I asked Bob why he let that man hurt me, he just shrugged.  Where is the love?

We snuggled up in bed after that and prepared for our next morning of awaking at 5:30am to get ready for our 7am pick up.  We woke up so early because I insist on eating breakfast when we're doing day tours because I don't like to starve.  The hotel buffet was pretty good, nothing amazing but good, oh and the yogurt in Thailand is amazing.  It's just really fresh and delicious.

So our day tour on Wednesday (November 24th) was to include: The Floating Market, The Bridge Over the River Kwai, and....The Tiger Temple!!!!  We were really excited about the Tiger Temple.  We ended up with the same driver from the day trip to Lop Buri, and it was a 2 hour drive to the Floating Market.  The Market is really a tourist trap but it's still pretty cool to see all these people in boats selling fun things or food.  There are seriously boats that are like taco trucks, that just sell different kinds of foods that the person cooks up right there.  It was pretty neat. I of course went crazy and bought things I don't need, for instance.....a jewelry box, but it's cool, and I love it!  We had a nice half hour boat ride around the area and every person wanted to sell us something, it's kind of crazy and again exhausting to have so many people vying for your attention.  I had one woman try to sell me a hat that was exactly the same as one I'd bought the day before for a 500% mark up!  CRAZY! 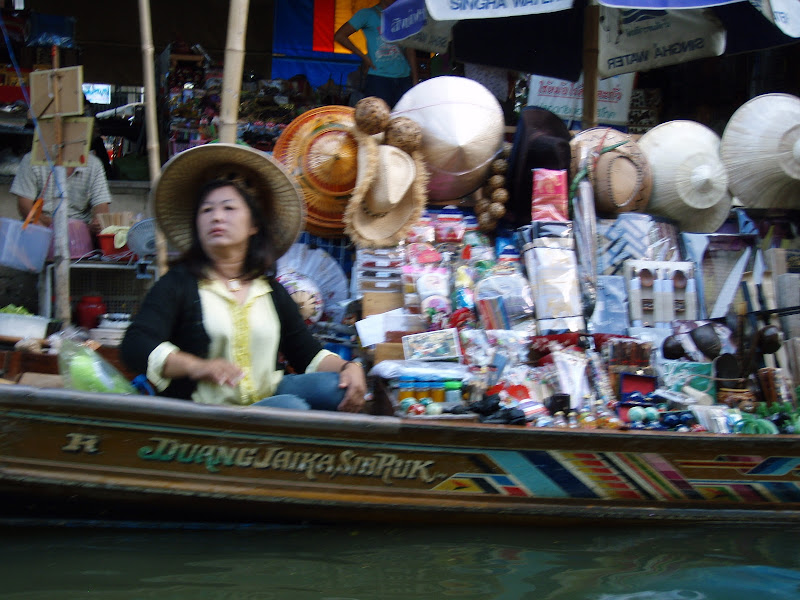 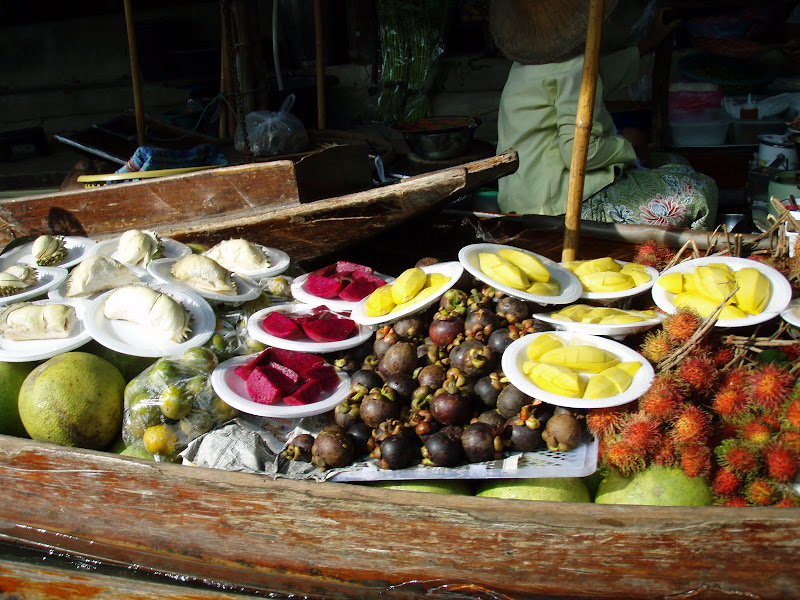 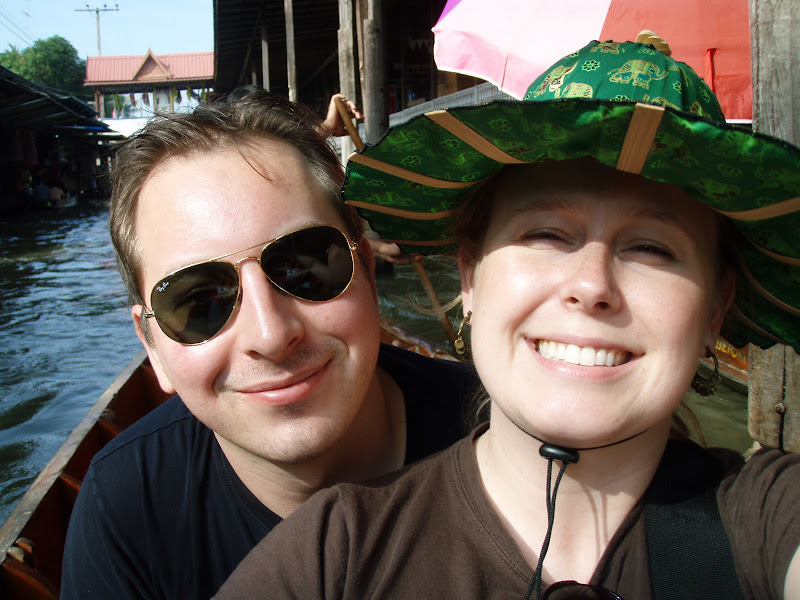 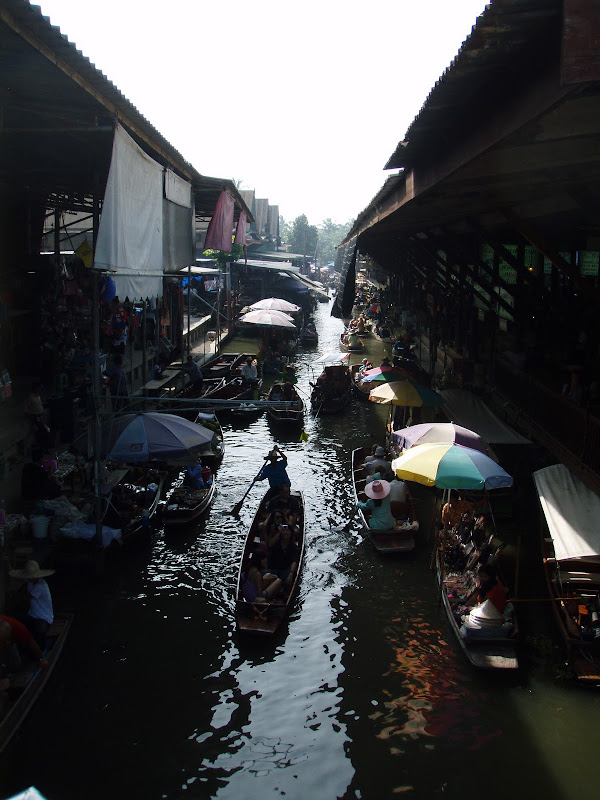 Amanda, this picture is for you: 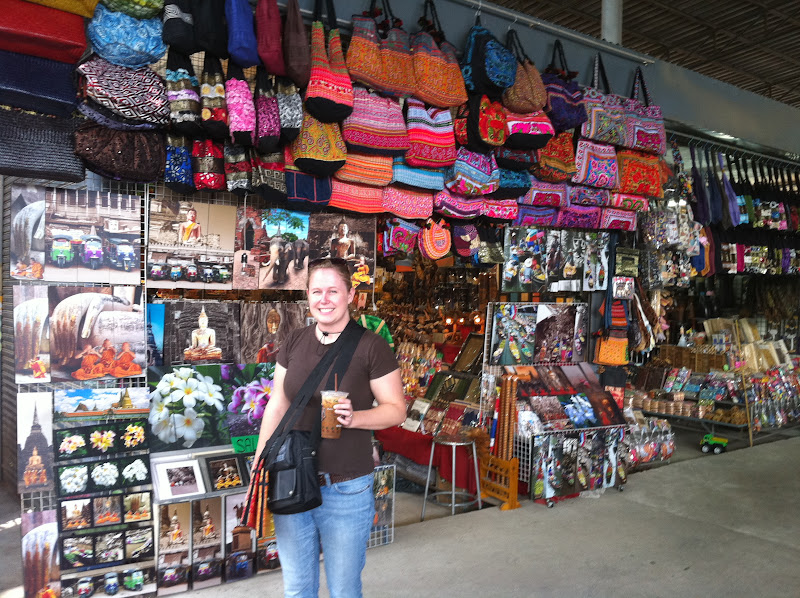 After the Floating Market we got back in the car and drove another hour and half to the Bridge over the river Kwai.  Interesting thing about the Bridge over the River Kwai, it originally was not the River Kwai, it was another river, but after the book and movie were made the Thai government changed the name.  And it's not the real bridge, it's just a replica, and there's a fair every year where they build another replica around it and burn it down as a re-enactment.  We missed that fair by a weekend, we'll know better next time.  :)  I wanted to embed a video here, but unfortunately can't figure out how to do it for the life of me, so instead here is a link (yes, click on the work link, and it'll take you to facebook where you can watch a video I made for my Dad at the Bridge Over the River Kwai).  For some reason I could have sworn I had pictures of me at the bridge but now I can't find them, oh well, here's Bob: 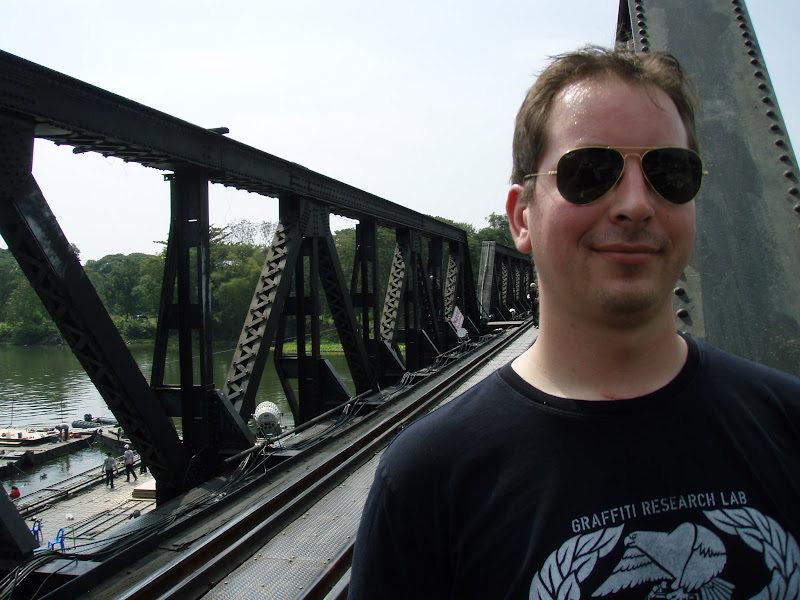 And now, the moment you have all been waiting for....THE TIGER TEMPLE!!!!!  So there's this Temple area about 2 hours outside of Bangkok and it's a place where people can bring animals that need to be taken care of.  Originally the Monks took care of tigers but now they take in all sorts of animals but the main draw is still the tigers, because they're super awesome.  I opted to sign us up to feed baby tigers and I am so glad that I did.  I would do this again, I encourage every single person who ever goes to Thailand to go on this tour, it is completely worth it.  We got to spend about an hour with 4 baby tiger cubs and then we also got to pet about a dozen full grown tigers.  There are volunteers and monitors everywhere to make sure people approach the tiger from the right direction and to keep things calm, because even thought everything is monitored there's still a chance you could have your face bitten off.  One of the baby tigers gave me a bite on the leg, but it's like when a puppy bites you and it's just for play, it was still pretty awesome!  The baby tigers were sooooooo cute! 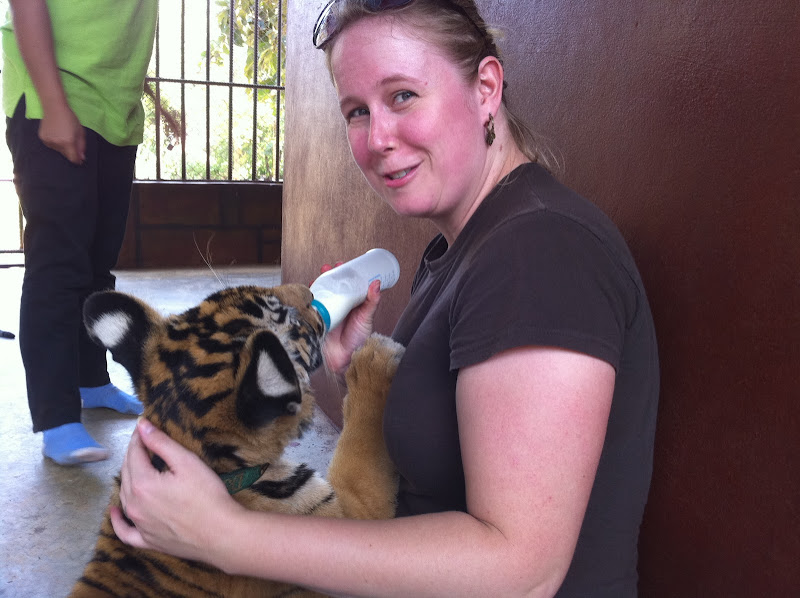 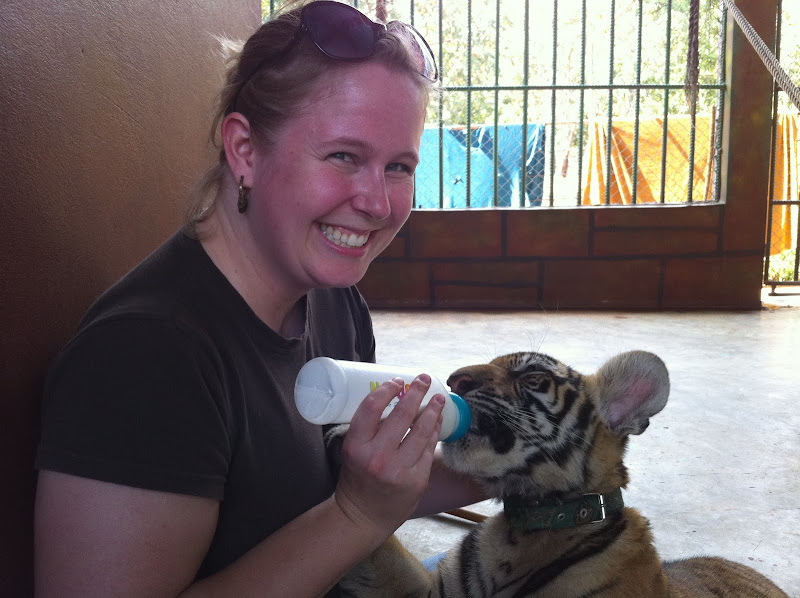 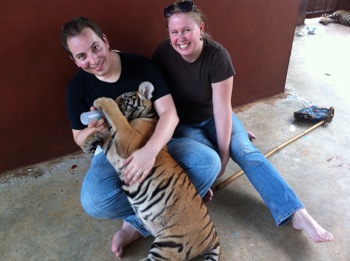 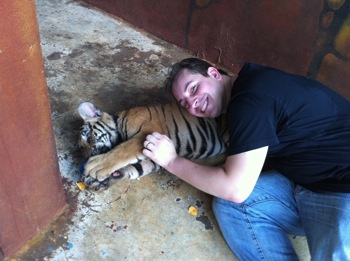 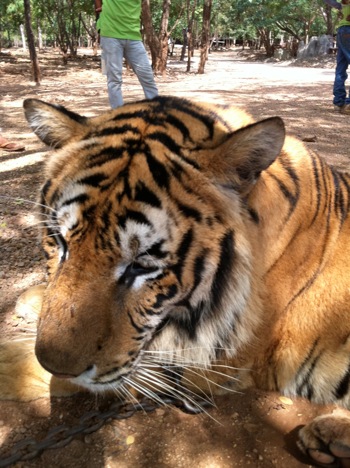 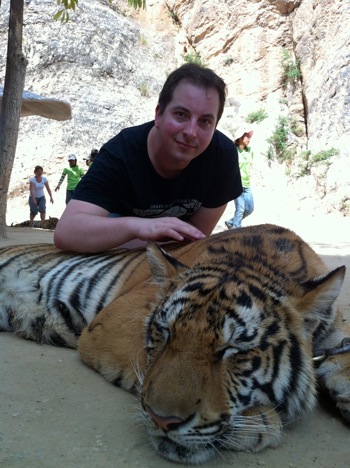 We had an absolutely wonderful day with the tigers.  It was so much fun, and like I said I would go back.  There are a bunch of different things you can participate in at the Tiger Temple, not just the baby tiger feeding.  We really only had time to participate in one thing but it was well worth it.  We left the Tiger Temple sweaty and gross, but really happy and headed back to Bangkok.  After getting all clean and taking a little break we got some rest and then headed out for a night on the town.  Okay, so I'm starting to get a little confused about where and when we ate so I'm going to go with this was the night we checked out the Absolute Vodka promotion thing that was going on down at the mall.  They had an ice bar!  So of course we went in!  It was sooooooo cold!  But AWESOME!  I should have worn pants then I could have been in the ice bar longer, but shorts are a little too cold for that environment.  For some reason Bob has all the ice bar pictures and has failed to give them to me.  That's right, I'm blaming him.  :)

We did some wandering around and then headed back to the hotel to relax, and settle in for the night.