Jay and Staci come to Shanghai (Part 2) The Shopping Day

The next morning Jay and I needed to get some work done so we turned on "Mama Mia" the movie musical for Staci to watch while we worked.  If you've never seen this, you should be happy, if you have seen this, I'm sorry.  We all love Abba, but that was terrible, the movie went for star power over quality of voice.  Meryl Streep and Pierce Brosnon cannot sing, at all.  We did all burst into song every time one of the songs came on, so that was entertaining.  Imagine us all sitting in the living room on the couch and then bursting into song while Jay and I are on our computers. Magical.

We headed out to lunch after everything was squared away.  I took Jay and Staci to my favorite burger place, Gourmet Cafe.  I can't help myself it's just so good, and Staci loves burgers so it seemed like the right thing to do.  We had waffle fries with bacon bits and jalapenos on them, yummy!  Staci ordered the cutest little slider burgers, we each had one and split a regular burger, it was like eating 3/4 of a burger, it was perfect.  I could eat there all the time, it's so good. 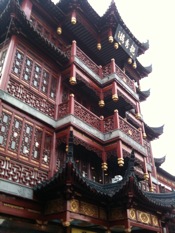 After stuffing our faces, it was time to wander and shop!!!!  We headed to the "Old Town" area of Shanghai, which is really like China Town in China.  It's full of every novelty item and Chinese knick-knack you could ever want.  I bought a beautiful jewelry box after haggling with a lady on the street.  I'm very pleased with my purchase, it's lovely.  We wandered around the small crowded streets and bought a pack of uno cards, because really what else would you buy in China other than a Spanish named card game? 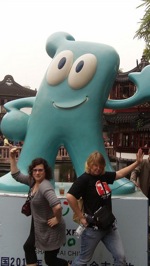 So Old Town Shanghai is known as YuYuan (you can read about it by clicking on the name).  The architecture is beautiful and there's a lake in the middle everything and a nice square where most people congregate.  Now there's a Starbucks in the middle :P  And the Expo mascot.  Don't worry, Staci and I had our picture taken with the Mascot, I know you were hoping that would happen.  After striking a pose in front of the statue a bunch of other Chinese ladies did the same thing, they apparently thought Staci and I were geniuses, which we are.

After the wander about we decided it was time to go somewhere a little less touristy.  We hailed a cab and headed over to Taikang Lu which is a back ally labyrinth of sorts in the French Concession.  The area use to be a small factory but after it closed it was turned into many many many tiny shops, cafes and restaurants.  I love the area because I feel like every time I go there I find something new.  We stopped at Kommune, an Australian Cafe, for coffee before starting to look around.  I had a BOWL of Mocha, it was delicious, one of the best mochas I've ever had.  I can't wait to go back and have more.

We did some wandering in the back alleys and touched pretty much everything we could.  I even found a pair of gold boots!  I totally wanted to get them, but I refrained, because I don't need gold boots, when I already own a pair in storage.  It was about time for dinner and it was starting to rain so we again hailed a cab and headed off to a restaurant Staci had been told about called "South Beauty."

The entrance to the place was amazing.  It was kind of like walking a plank, it was a narrow walk way with a small fish pond on either side and there was a sliding door on the other end that was a mirror, so while you're walking this plank all you can see is yourself.  It was weird, but awesome.  We ordered yummy pork ribs, shrimp salad, fried eggplant, and minced meat lettuce wraps.  I tried to burn my hand off on the sauce for the eggplant sauce, don't worry I still have a hand, and it wasn't as bad as I had whined about at the dinner table.  Thank goodness.  Sadly Bob couldn't join us for dinner because he had a dinner meeting. 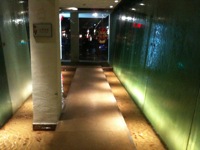 After dinner we walked down the block to O'Malley's Irish Pub to wait for Bob.  He was able to join us shortly after we got there and thus began the Uno game that would never end.  We seriously played Uno for 4 hours, it was ridiculous!  The game would not end and at the end Staci and I started to team up just so the game would end and we could go home and go to bed.  It was actually really nice sitting out on the patio in the run under a nice big umbrella.

We made it home at around 1:30am, we were all beat, and poor Bob had to get up super early the next morning for more work.