At the MacroJoy office i got to see all the people in the office working on new Flash Games.  It was really neat!  Michael gave us a tour and we met some of the artists for the games and the programmers.  I got to see the portfolio of one of the girls working on a new Commando game, and she was really talented.  She was working on the splash screen artwork and it was very detailed.

We spent the day working and then headed back towards our hotel around 5pm because we had dinner plans with a friend of Bob and Jameson's in the city near our hotel.  We went to a really snazzy place called The Jockey Club, and per usual had our own room.  The table was huge!  It was big enough for 12 people and had a giant lazy susan in the middle of the table, which I love by the way.  I hope to one day have a giant round table in my house with a lazy susan and then have dinner parties and potlucks all the time.  They will be costume parties, obviously.  The food was good, and we had Peking Duck which is like mini fajitas.  You get a little bit of duck, and it's kind of crispy and juicy at the same time, and you little eggrole-like wraps that you put the duck in and you add some ginger and cucumber and a little chili sauce and it's delicious.  I hadn't realized how yummy duck could be, but I'm definitely becoming a fan.  Dinner went pretty late and afterwards we just headed back to the hotel, and prepped for the next day of fun and excitement.

The next day, Wednesday, we met up with Jameson at the mall near our hotel and grabbed a quick bite to eat before heading towards the Forbidden City.  There were soooooo many people outside the gates but the lines kept moving so it wasn't too bad and we got in rather quickly.  I had my picture taken with the large portrait of Mao which is hanging on the outer wall of the city and looks across to Tiananmen Square where he's buried.  We all picked up audio tours, and wandered through the grounds of the Forbidden City.  The place is gigantic!  All the buildings have different "totem" animals on top to signify it's importance and also keep the occupants inside safe.  The more totems the more important the building.  We also all rubbed the giant metal/goldish orbs on the the big red doors as we entered the city for good luck.  (That's what you're suppose to do, and all the orbs are starting to fade because of all the people touching them.)

The whole tour experience took about 2 hours, and was a nice and easy walk as most things are flat.  There are stairs here and there, but really it's pretty easy and leisurely.  Just outside the other side of the city, when we had finished the tour, were all these carts selling what looked like giant granola-like fruitcake.  You'd just go over and they'd cut off a slab for you.  We didn't try it, but I was intrigued.   As we walked along the river we saw a couple having their wedding photos taken in traditional garb.  We walked Jameson to the subway station and then decided we'd go have dinner at a place a read about on the plane. 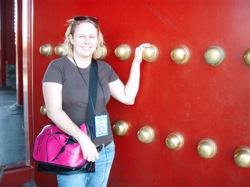 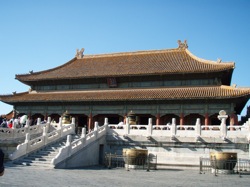 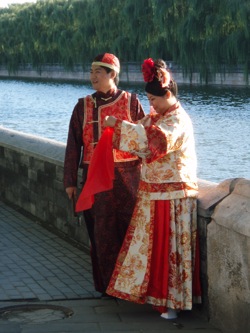 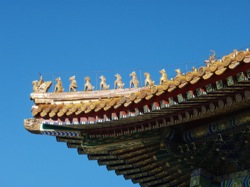 We went in search of Tim's Texas BBQ.  I had read in the newspaper on the plane from Tokyo to Beijing about Tim's BBQ and it had great reviews on the place.  It turned out that Tim's was further away than we had expected so we did some serious walking.  We got there just as it was getting dark, and sat out on the patio and ordered the brisket and margaritas.  I've come to the conclusion that my dad would do great opening a brisket place in Beijing because Tim's was okay, but more sweet and vinegary than I would have preferred and dryer than I would have liked.  My dad could open "Al's Brisket and Beans," and I bet it would be hoppin'. 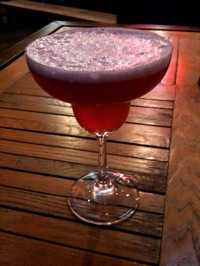 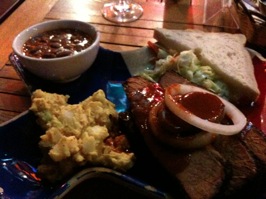 Tim's was nice though, it was nice to sit out on the patio and enjoy a couple of drinks.  The place is definitely decked out Texas style and they sell cowboy boots that they have hanging from the ceiling.  AND we were extra surprised when there was live music!  We ended up staying until around midnight because it was so much fun.