We spent the next morning bumming around and being lazy and decided that we'd go back to Tim's BBQ that night for more live music.  We did try a dumpling place for lunch that was really good.  We ordered too much food on accident, but managed to control ourselves and not over eat until we were sick, which is hard to do sometimes.  We were the only white folk in the place, so it was quite an experience.  Bob will tell you I don't like going places where I can't either point at a picture to order or read the menu.  I fell safer being able to do one of those two things.  Yes, I'm a whiner, but when it comes to food I like to know what I'm getting otherwise it can be so disappointing.  The dumplings were yummy, and we had a variety of them along with eggdrop soup. 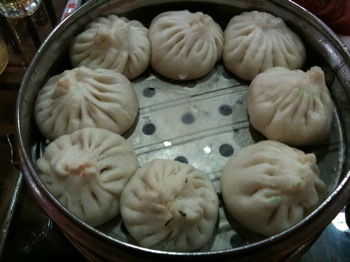 We worked for most of the afternoon and then headed over to Tim's BBQ for some appetizers (yummy cream cheese stuffed jalapenos and 7 layer dip).  We played some games, and listened to the live music for a while.  Sadly my tummy started acting up again so we cut our night short and caught a rickshaw outside the restaurant.  For those of you concerned about my tummy, it's okay, I went to the doctor and I'm all better now.  But for the rest of that night we ended up tucked in bed watching tv. 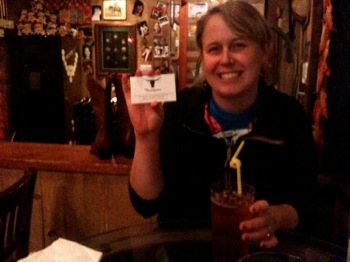 In the morning we packed up our things, and had breakfast at the hotel again.  We did some work and then checked out of the hotel and left our bags with them while we did one last wander about the shopping street.  We got a little green tea ice cream treat and then caught a cab to the airport......

Where I was again stopped by security.  Not because of my belt, I was smart and mailed that to myself.  First, I was stupid and had left a water bottle in my bag, I admit that was my fault.  But then they wanted to open my other bag because apparently they were afraid of my power adapter for my laptop, as well as my digital camera.  They took my passport and boarding card and for all I know I've been flagged for flying in China.  Anyway, they gave it back and spent the rest of the afternoon sitting in the "Jackie Chan Cafe" at the airport where there were glamour shots of the actor all over the wall.

And that, in a nutshell, was our trip to Tokyo and Beijing!