Okay, so we had just finished where I had been asked by security in the Tokyo airport if I had a gun in my bag.  I told them no, because I didn't and that they were welcome to look through my bag.  I couldn't think of anything I had that was at all gun-like.  When security finally found my revolver belt buckle everyone backed away because apparently revolvers come that small and bejeweled.  I laughed and started putting it back in my bag when I was told I would not be able to take the belt on the plane because "it looks like a gun."  I argued, had my passport taken away from me and all my information was recorded and then Bob and I were escorted back out through security to "check" my bag.  I threw a fit.  It was completely ridiculous.  They wanted me to check my laptop bag which had, my laptop, the ipad and my digital camera in it along with all the cords and other things I carry about.  Then they suggested that they could just check the belt by itself.  I told them absolutely no way because that's how stuff gets lost.  They finally found a box to put the belt in so it could be checked.  Needless to say I was livid.  Would they have taken away my earrings if they had looked like guns?  What if I was wearing a shirt with a gun on it?

So after the ordeal at the airport we made it to Beijing, at around 10:30pm.  we picked up our checked luggage and headed out to find a taxi.  I had to yell at a Chinese lady who tried to cut in front of us in the taxi line.  We finally got in a cab and were heading out of the airport when we made it to the toll area, and for some reason all the booths were backed up with at least ten cars, and no one was moving.  Cab drivers were getting out of their cars and taking smoke breaks and no one seemed at all fazed by the lack of movement.  About 20 minutes later everyone got back in their cars and we were on our way.

The airport is about a 45 minute taxi ride away from where we were staying in Beijing.  We stayed at the Sunworld Dynasy Hotel, because I had found a deal online and because it was fairly centrally located to things I wanted to see.  The hotel was only two blocks East of the Forbidden City, we could see the rooftops of the buildings and wall around the city from the hotel window.  The hotel was also on a major walking street for shopping which was nice because our first full day there it rained and we needed buy Bob a jacket.

Okay, so we got in late Sunday night.  The next day, Monday, Bob and I wandered around for a little bit and had lunch at a mall food court, because he had a meeting later and we didn't want to venture too far away from the hotel.  It was pretty good, we ate at a noodle place, and I only got a little great on the front of my shirt.  We stopped at Hugo Boss and bought Bob a sexy new jacket, he looks super awesome in it.  Around 3pm Bob left for a meeting way out on the North West corner of the city.  The plan was for him to meet up with Jameson and then they had meetings with a company called MacroJoy, and then I would meet up with them at 7pm and we'd go to dinner.

Because of the rain everything was really crazy.  I got a text from Bob at 4pm telling me that I would need to be in a taxi and on my way to meet them at 5:30pm in order to make it by 7pm.  Traffic was sooooo terrible.  It seriously took an hour and a half to go 20 kilometers.  Crazy! ﻿ 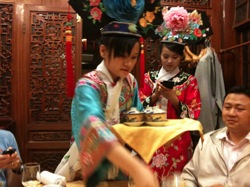 And the first couple of taxis who stopped to pick me up refused to take me where I wanted to go because it was too far away.  I don't blame them, it was ridiculous.  Anyway, after wondering if I'd ever get there I made it and we all (Bob, Jameson, Michael who is the founder of MacroJoy, and his wife Emily) went to dinner at a really cool restaurant.

The restaurant was the emperor's son's Summer home long ago and has since been renovated into a large restaurant made up of different little buildings with water features all around and beautiful lanterns and outdoor tables.  All the wait staff wear the traditional garments and shoes, and every table is assigned a guide to get in and out of the restaurant so guests don't get lost amongst all the greenery.

We had our own private little room and had some of the best food I've had in China so far. 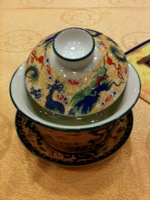 We ate some delicious duck that tasted like honey ham, and had deer that was really tender.  There was a salad made out of rose petals and other various flowers with a vinegar dressing on it that was actually quite good.  And of course as usual we had water melon juice.  Mmmmmm, water melon juice.  We ate so much food but it was all so good that we didn't mind feeling so full.

By the time we got back to the hotel after dinner it was pretty late so we called it a night and tucked ourselves into bed.  We had to get up early (not that early) the next morning because we were going to the MacroJoy office to work for the day. 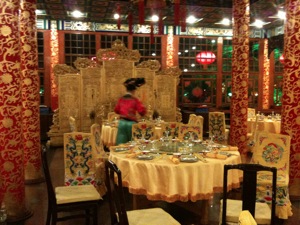 As you can see the rooms were amazing, and we had gorgeous dish sets that we ate off of.