Back in Shanghai - Hooray for home!

We spent Monday being lazy and doing laundry.  I feel like I write a lot about us being lazy, but after living out of a suitcase for 2 weeks I was ready to lounge about on the couch.  We had lunch at Gourmet Cafe, yum, with the delicious burgers and had our first hospital experience (not because of the burgers).  I was actually quite please with the clinic we went to.  The doctor was super nice, and my international insurance worked out great.  My doctor even wrote me a personal email to follow up with me!  Amazing! 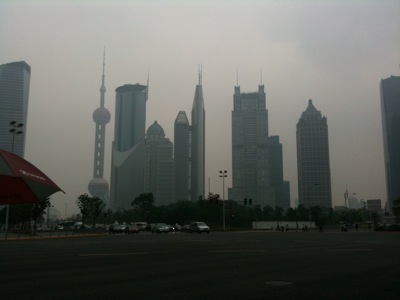 On Tuesday I met up with Glen and Maggie (from our Beijing adventure) to play tour guide for the day.  The weather was total crap so we didn't go to the Expo like Glen wanted.  (I'm sorry Glen.)  We did go to the bottle cap building, to be honest I'm not sure what the real name of the building is, but it's the really tall building in Shanghai that was designed by the Japanese and originally had a giant circle cut out of the top, but the Chinese thought that looked too Japanese (which it did) and made them change it to a square.  It looks like a giant bottle opener, and you can stand on an over look that looks straight down from the 100th floor and it supposedly has a beautiful view of Pudong.  Because of the weather there wasn't much to see, so Maggie and I had donuts while Glen went up to the top. 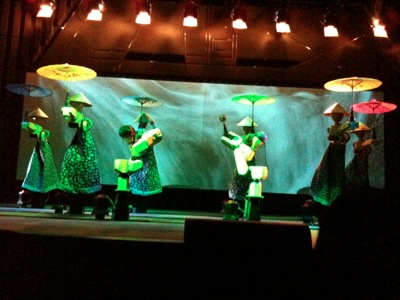 After the bottle opener building we went to the Science and Technology Museum.  I hadn't been yet, and I am now pleased to say that I thought it was pretty nice.  There's a lot more in there than I had expected.  We only visited two sections of the building so I'll have to go back and see more, but what we did see was fun.  We wandered around the fake animal habitat and learned about animals, bugs, fish and bacteria.  (Yes a slightly weird combo.)  And then we went to the Robots section!  We got to see some dancing robots, and I say that using the word "dancing" very loosely.  There was also an archery range to show how robots can work together, the example was that one robot could hold the bow while the other would pull the arrow and they could always hit the bullseye.  People could line up and try their best at the archery area and both Maggie and Glen gave it their best shots. 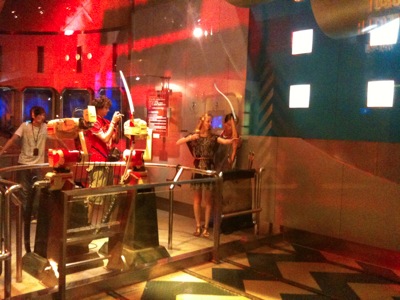 After the Science and Technology museum Glen, Maggie and I headed back towards The Bund so they could see the lights come up across the river.  The boardwalk was packed!  That's what we get for going during a Chinese holiday.  We met up with Bob and Eric at New Heights, a restaurant with an awesome view, and had drinks while all the lights came on across the river.  I plan on taking everyone who comes to visit to that restaurant because it really is an amazing view.

And then for the best part, we took Maggie and Glen to HaiDiLao!  Mmmmm, best hot pot ever!  They had had some hot pot when they first arrived in China but didn't really know what it was so hadn't enjoyed it, we fixed that with a trip to the best hot top place ever.  We ordered so much food but it was delicious and Maggie was able to take home an apron from the restaurant along with a little bag of lavender.  After dinner we went to the hostess bar by our house called "The Flying Dragon" and played liar's dice and cheat until a little after midnight, when I made the call that the evening was over.  What can I say, I'm like an old woman, I love going to bed early.  We sent Maggie and Glen back to their hotel and wished them luck with the rest of their journey through China.

I'm going to have to go back to the bottle opener building when the weather is better.