Beijing - Kung Fu, The Sacred Way and The Great Wall of China

The next day we bummed around the city and did some looking about.  It was a pretty easy going day, and we got some work done as well.  We bought tickets for the evening to see "The Legend of Kung Fu" which turned out to be a lot fun.  I think I would have changed the the title to something more like "A Kung Fu Story" or something along those lines because it wasn't really about where Kung Fu came from.  It was a story about a boy who becomes a Kung Fu Warrior, and his journey to get there.  It was like a Kung Fu ballet, lots of choreographed dancing/fighting.  It was definitely worth going to see, and the show was impressive.

We did have an interesting time getting to the theater for "Kung Fu" because our taxi driver apparently didn't know where it was.  We stopped twice so that the taxi driver could ask other people how to get to the theater.  That was weird, but entertaining, and we did eventually get there so no worries.

After the show we walked back to the hotel which took a while because Beijing is so spread out.  It was 11pm by the time we got back and I was needing a snack, so we had nachos in the hotel restaurant and played games on the ipad. 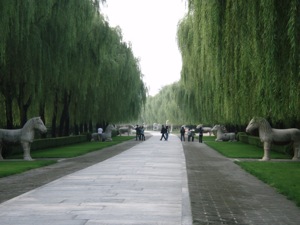 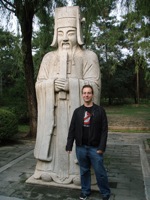 ﻿The next morning we woke up early and had breakfast at the hotel which was a large array of various international dishes.  We had Chinese, Japanese, American and European.  The hotel had a beautiful atrium in it so breakfast was very nice.  We tried not to fill up too much because we were going on the tour of "The Sacred Way" and "The Great Wall!"  We booked a day tour with www.amazingtripchina.com and started the morning off with "The Sacred Way" which is really just a very long road that leads up to the Ming Tombs.  It's very pretty, and park-like and the road is lined with statues of different animals and warriors paying homage to the emperors who would pass through the Sacred Way.

We only experienced a small section of the Sacred Way, which was okay with me because I was really only there for the Great Wall.  I would recommend checking the area out if you ever have a chance and you want a nice peaceful walk.  It was beautiful.﻿ 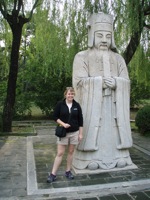 I hadn't realized it, but part of the tour was a Chinese Medicine museum/hospital thing.  We﻿ got a tour of the little museum and then were encouraged to get a consultation from the doctors to hear about Chinese herbs and healings.  The doctor I saw told me I have a chronic immune issue and that Bob should stop drinking.  Then the doctor tried to prescribe me 2,000RMB worth of prescriptions to help my chronic problem.  All the guy did was take my pulse and look at my tongue.  We declined the medication.

During the Chinese Medicine adventure we made friends with a couple of Brits named Glen and ......Margaret!  (She goes by Maggie.)  We were all laughing about what the doctors had told us.

After the Medicine experience we went to a Jade Factory, I had no idea it was part of the tour and to be honest I don't care about Jade in the least.  So Bob, Glen, Maggie and I wandered about the Jade Factory for a bit and then the tour was herded to the tamest lunch I've had in China so far.  It was like eating Chinese food in the states.  It wasn't bad, but it wasn't really Chinese either. 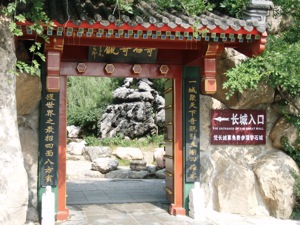 Finally, after lunch we went to The Great Wall!!!!!  We went to the Mutianyu section, which is one of the best preserved sections, and also one of the steepest and because of that is less touristy.  There are three different options for climbing the wall from this section:

1- A small hike up to a lower part of the wall that's a bit easier to manage.

2- A longer hike to a middle section of the wall that has a loge (yes a loge) you can slide down!

3- A cable car route that takes you to a higher, steeper part of the wall, and you can go to the highest point of the wall in about 45 minutes to an hour. 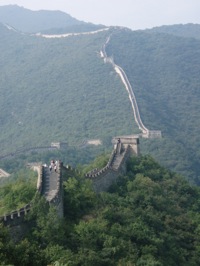 We only had 2 hours at the wall before we had to be back at the tour bus, we chose the cable car route and went as far as we could until we needed head back.  The cable car drops you off at Tower 12 and the highest point is at tower 23.  Bob, Glen and Maggie made it to Tower 21, and I made it to Tower 19.  I didn't go further because I wasn't feeling very well by that time in the day, and I knew we'd be back in Beijing in October and at the Great Wall again. 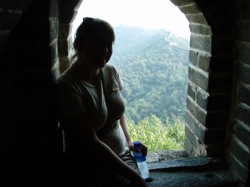 The views were absolutely beautiful and we took lots of pictures.  We made it back down off the wall with 10 minutes to spare, and I stopped to haggle for a folding hat for our friend Amanda (at Mochi).  (Yes Amanda, I found your folding hat.)  Bob was quite proud of my haggling skills.  The woman asked for 25rmb, and I said, "10rmb" and she said, "20" and I said, "10" and she said, "15" and I said "no," and started to walk away.  Then she called after me and sold it to me for 10rmb, and gave me the stink eye.  I was very pleased, and Glen and Maggie seemed impressed as well. 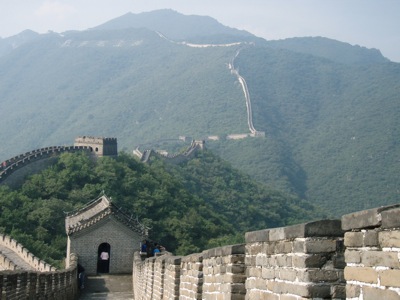 We all piled back into the bus and headed back to Beijing.  It took about 2 hours to get back.  After we arrived in the city we showed Glen and Maggie around the area of the city we had been staying in.  Glen had mentioned he wanted to try starfish on a stick because he'd read about it in a book, and Bob and I knew  there was an alley near our hotel that had lots of things on sticks.  Shrimp, beetles, cockroaches, scorpions, starfish, seahorse, and centipedes.  So we went over to the alley and we all tried starfish.  It was very good, so we went for a bubble tea afterward.  We said good night to Glen and Maggie (Who came to visit in Shanghai the next week!)  and headed back to the hotel.  We were really tired after our day of fun and excitement, and my tummy still hurt. 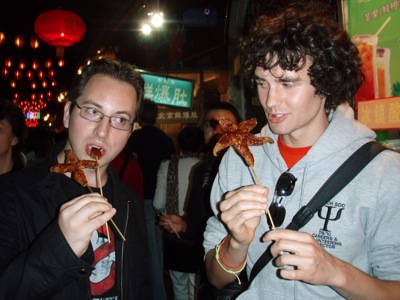