Last Day in Bangkok and off to Siem Reap!

Okay, so our last full day in Bangkok was Thursday, November 25th, aka Thanksgiving!  We got up and had some yummy buffet breakfast and then got a bunch of work done, I know so exciting, but it still has to be done.  We worked all morning and then were getting hungry again, and I need to find some specific things I was looking for, for certain people, wink wink, nudge nudge.  We did some wandering and shopping and then had a really delish lunch down a back alley street.  That's right, we like to walk down back alleys, cause that's how we roll.  We ate lunch at Madame Suan. 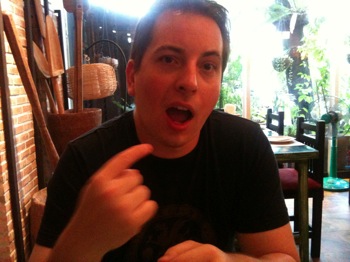 Me in front of the the restaurant, in my new hammer pants: 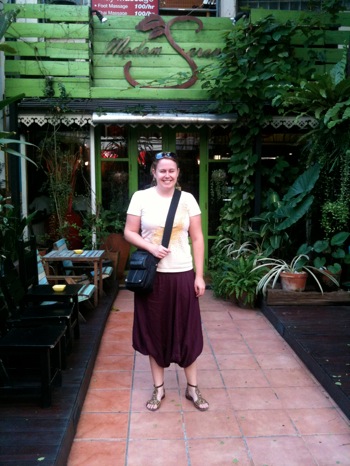 Check out the sexy sandals I'm wearing, I bought them at the floating market and they're super awesome.  And I'd taken to wearing my hammer pants at this time because I'd run out of real clothes to wear.  They're really comfy, I may live in them forever.  So we did some wandering about and shopping for the afternoon and then we had to work some more, sad.  We worked for the afternoon and then decided we should check out the night market that our new friend Jason had told us about, and the plan was to meet up with him.  So we had an adventure on the Thai metro to get to the market....check out the subway token: 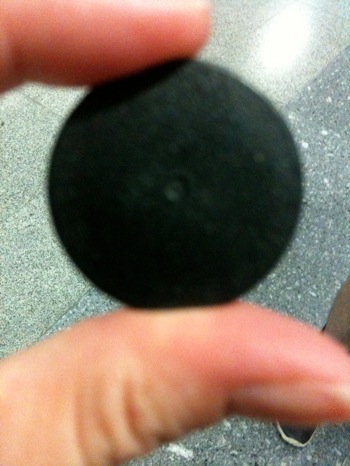 The token makes me think of an old game called.....I don't remember but I'll think about it and get back to it later.  We got on the subway and while getting ready to leave the building we decided we were really 13 which is why we took the below picture: 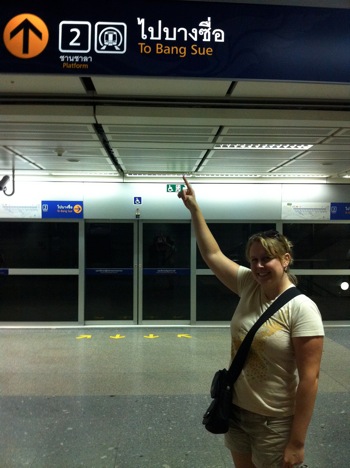 Hehehe, "Bang Sue," hehehe, we would be heading to ....Bang Sue....at the end of the night.  Yes, we're that ridiculous.  We took this picture for Jay, we know he'll love it.

Okay, enough of the nonsense, we made it to the night market which was nice.  It's so much nicer to walk around and look at things when it's cooler outside.  The market is pretty impressive and there's a gigantic food court area to the side of it, that shares all kinds of awesome food.  We looked at about a million different stalls, poor Bob was very patient.  And then we found the most amazing thing ever!  We found a Fish Massage place!  There are these little fish called Doctor Fish that eat dead skin off of you, so we got a 15 minute Fish Foot Massage. 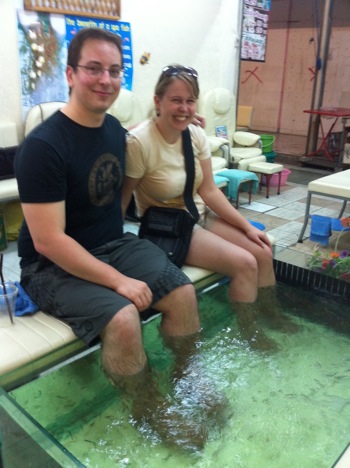 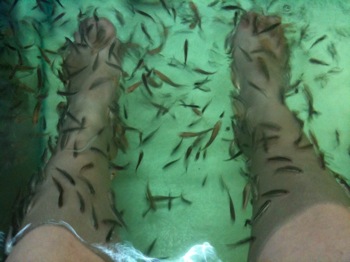 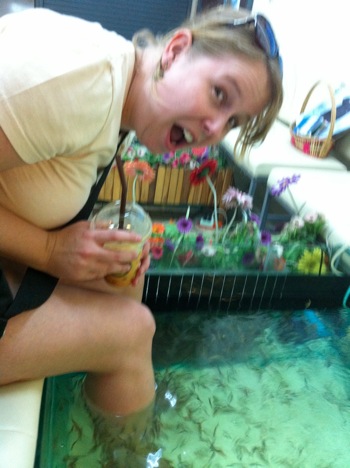 It was pretty rad.  After our fish massage we met up with Jason and went to dinner.  We were going to check out a place that Jason's wife had suggested but it was closed :( so we walked up another alley!  As we were sitting there I asked Jason if we were in the "Gay" Area of the city, and it dawned on him that there was indeed a "Gay" street in that area but he'd never been to it, and then as he looked around, and we all looked around all the tables were of couple's of men sitting together.  Hehehe, it was awesome.  And after...we went.....to....a ping pong show.  Yes, that's right, we celebrated Thanksgiving by going to a Ping Pong Show!  We walked into a place just right off the main street and low and behold there were girl's doing things with ping pong balls that I've never seen before.  It was like watching a wreck, we couldn't look away.  I will share details with anyone who contacts me, otherwise it's probably not for everyone.  I'll just say that we washed ourselves very well at the end of the night.  We had a great Thanksgiving.

The next day we got all our stuff together and had to head to the airport.  We ran into an interesting situation on the way, when we realized that we were short what we would need to pay the cab driver.  Luckily Bob convinced him to take RMB from us, whew, that was scary.  Anyway, we made our flight and we were on our way to Cambodia!

So another funny story.  When I booked our flight original it went like this (all direct flights) Shanghai to Bangkok to Phnom Penh to Shanghai.  I had looked at a map and thought that Siem Reap was much closer to Phnom Penh than it actually is, so I ended up booking a completely different round trip flight from Phnom Penh to Siem Reap and back, the only problem was that we had 1 hour to deplane in Phnom Penh, go through immigration, and get visas and then go back through security to get on our domestic flight.  We did it!  And we had time to have a coffee.  That's right, we are rockstars.

We made it to Siem Reap, and our cab driver was awesome!  Mr. Dina, as we were told to call him offered to drive us all over to all the ruins for $25USD a day.  Yes, you read that right, we had a personal driver for $25 a day.  It was rad.  He dropped us off at Le Meridien in Siem Reap, that's right, we stayed in style and then picked us up later and recommended a place to eat.  It was great, we got to watch live Thai dancing.  He drove us around in a tuk-tuk at night and showed us a bunch of different local areas.  We agreed that Mr. Dina would pick us up at 7:30am, so we didn't stay out all night.

Our awesome hotel room, there was a window into the bathroom: 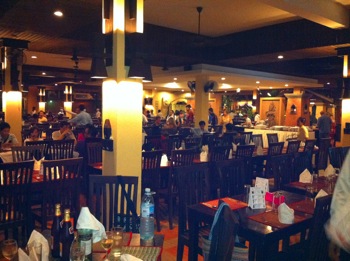 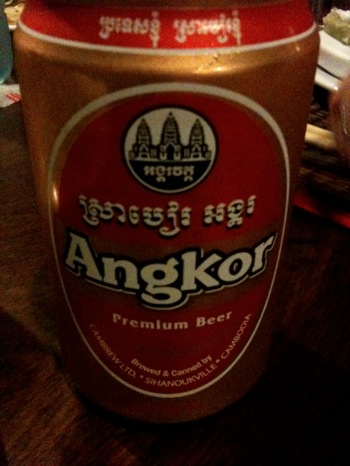 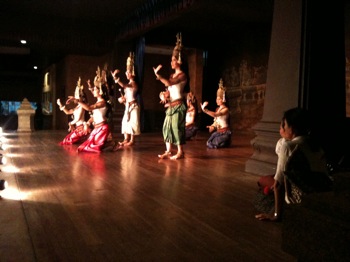 The outside of our hotel, awesome: 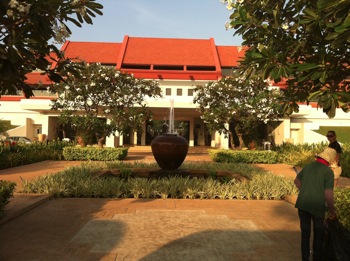 Stay tuned  for even more excitement about Angkor Wat, and all the fun ruins.  Wait for it, wait for it!