Last Day in Siem Reap, off to Phnom Penh and then Back to Shanghai (The End of the Thanksgiving Adventure)

So on our last day in Siem Reap we got up early once more, and enjoyed the breakfast buffet the hotel had to offer and then were off on the go with Mr. Dina to see the Tomb Raider 2 Temple, and the Floating Village.  We stopped at a little road side place where there was a family cooking sweet coconut sticky rice.  They cut chunks of bamboo and clean out the inside of the stick and shave off a lot of the exterior and then fill the interior with sticky rice mixed with coconut and red bean and then place the bamboo on hot coles to roast the bamboo and everything inside.  After everything has cooked (about an hour) they pull the bamboo off the fire, shave off the burn bamboo and cut open the shoot to eat the yummy rice treat inside.  Mr. Dina said that a lot of Cambodians will eat just this for lunch, it was pretty good.  Sweet but not too sweet. 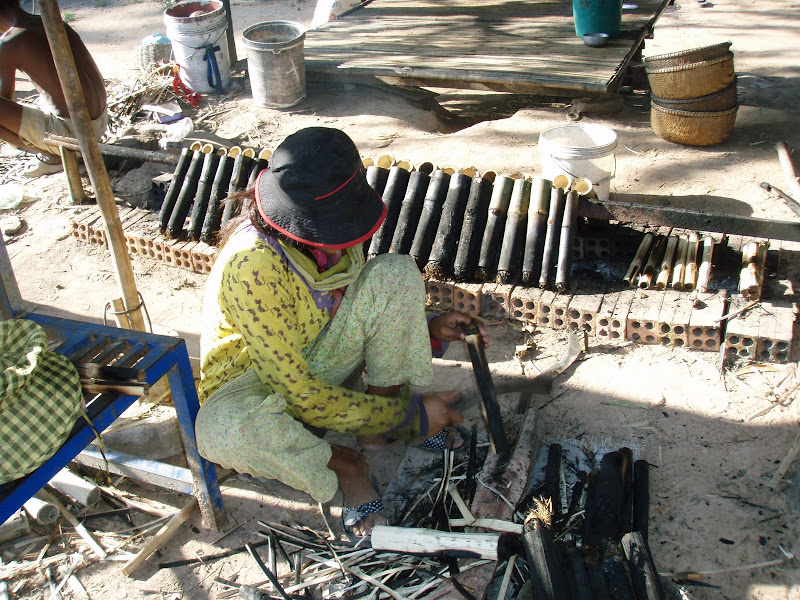 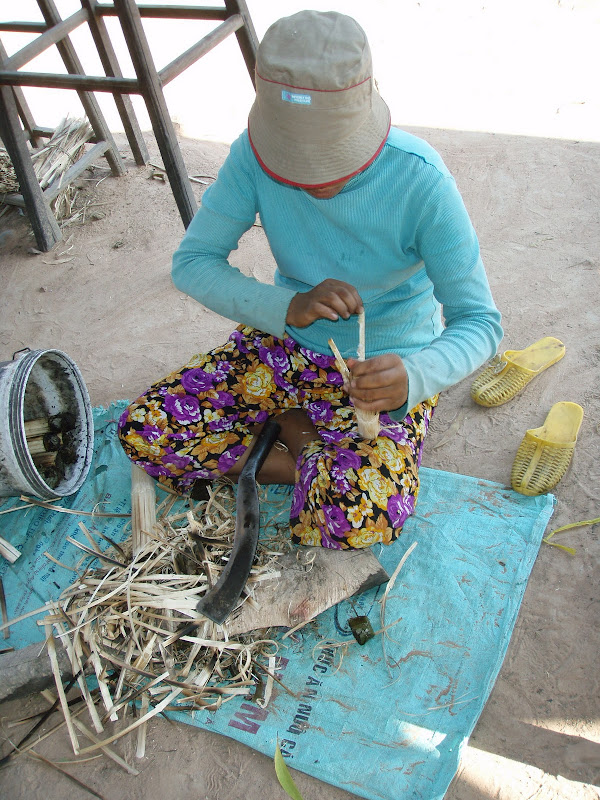 After our treat we continued on towards the last temple we would visit, the Tomb Raider 2 Temple.  It's about an hour outside of Siem Reap so not as many people go there, but it was completely worth the trip.  I would say that this was by far our favorite place.  It's been abandoned for over 1,000 years and it's just falling apart but it's like an adult jungle gym, you can climb on everything.  It was going great until I followed Bob into a hole and turned around and couldn't find him anymore and then ended up in what would have been the moat (it was dry) and couldn't figure out how to get back in to where everyone was.  I climbed up on top of the interior wall of the structure and could look down into where people were and say Bob, threatened to kill him, and then two little Cambodian boys helped me get back in.  We gave them each a dollar. 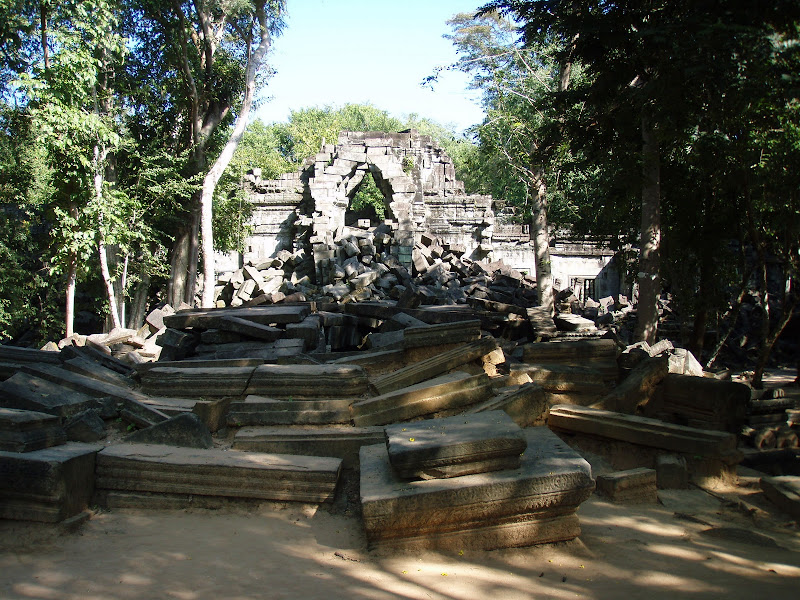 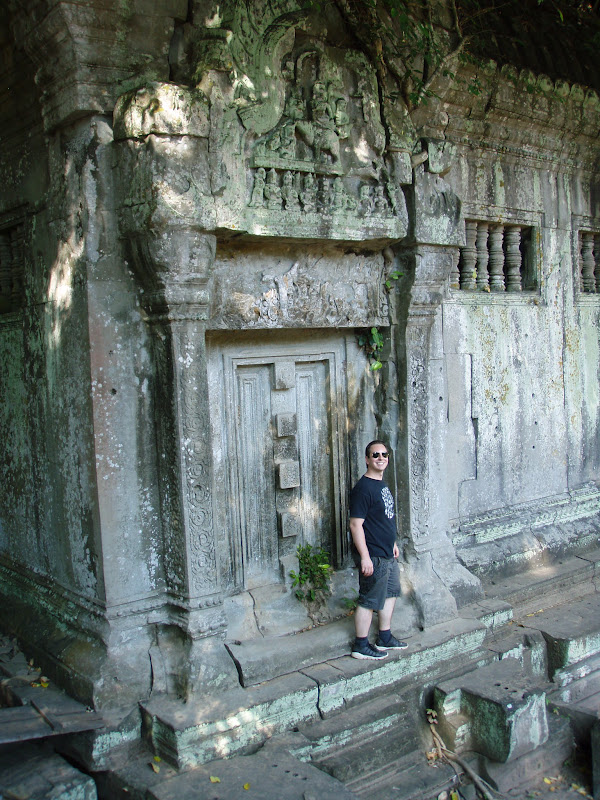 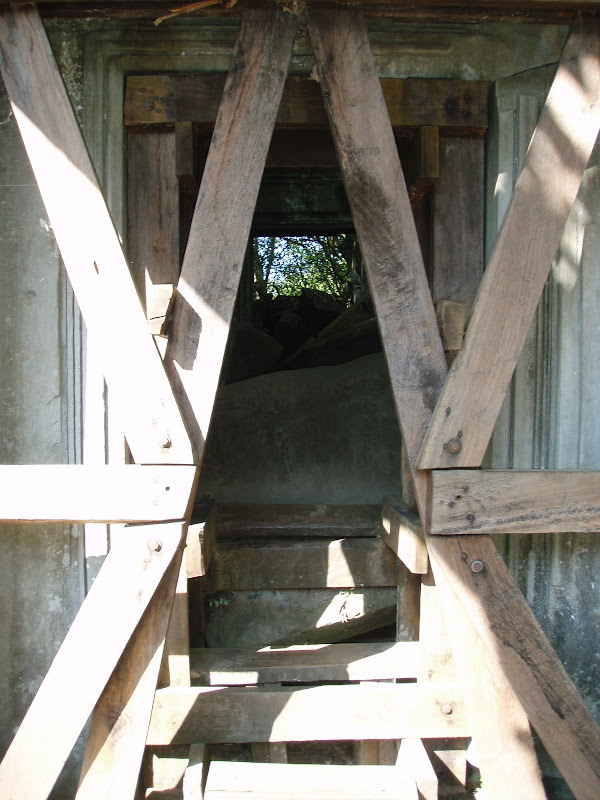 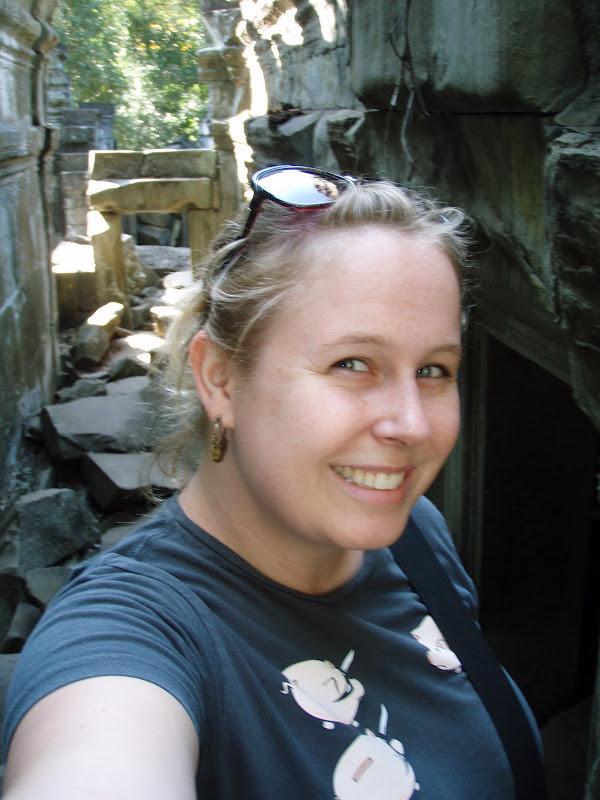 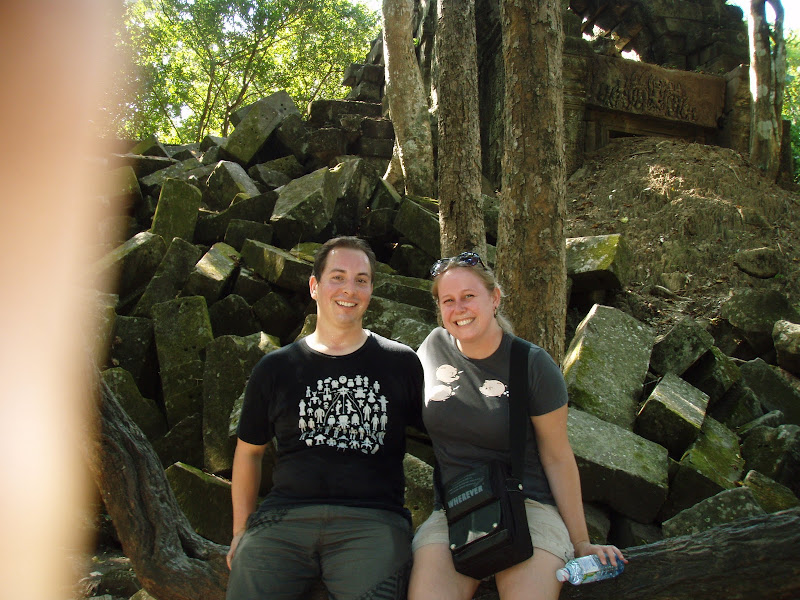 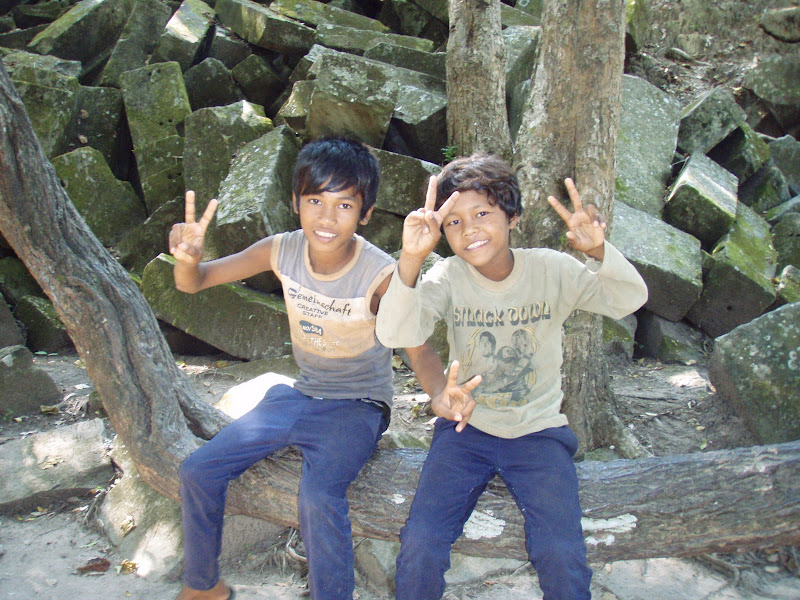 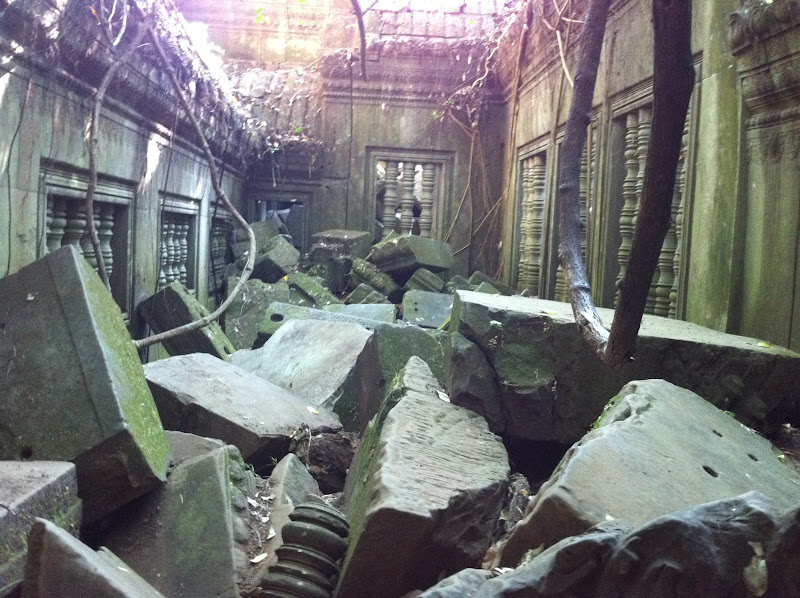 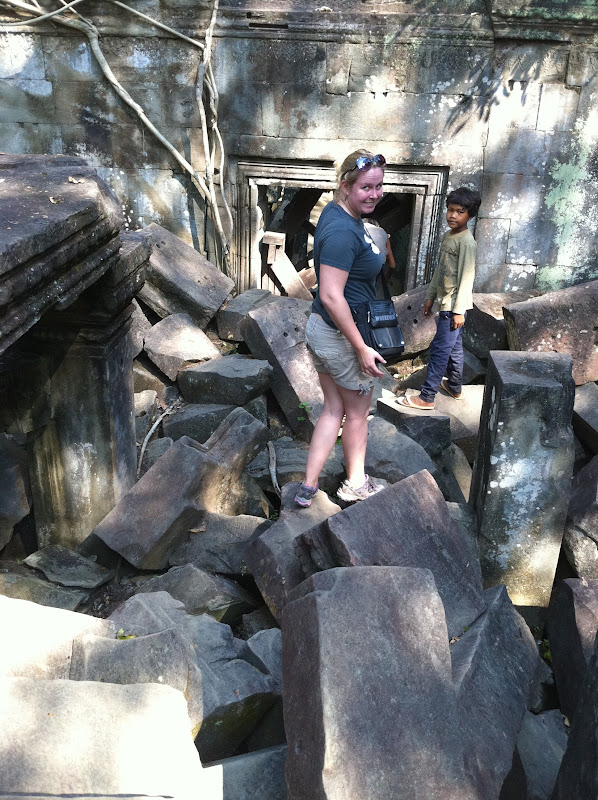 We climbed on everything!  And this isn't like when you go places and they've marked off spots that could potentially kill you.  Sometimes I'd step down and the rock would move.  We even had to lie down and squeeze ourselves through one spot.  It was crazy but super fun.  And we were really gross at the end.

After the Temple we drove toward the Floating Village.  We didn't really know a lot about it, and in retrospect I might have skipped it but we had a nice boat ride.  There's a village that has houses built high up on stilts because of when it rains and floods everywhere, because we were there during the dry season we could see more of the stilts parts of the houses and usual.  It's pretty neat.  We had our very own speed boat (which seemed like such a waste when we would have been happy to share.) and road all the way through the village.  You can transfer into smaller boats to ride through the marshy jungle but we didn't really have time. 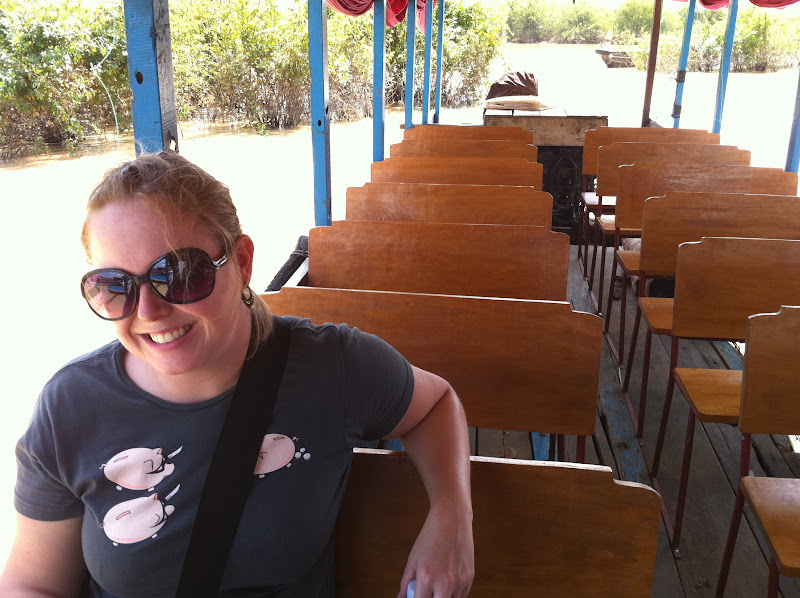 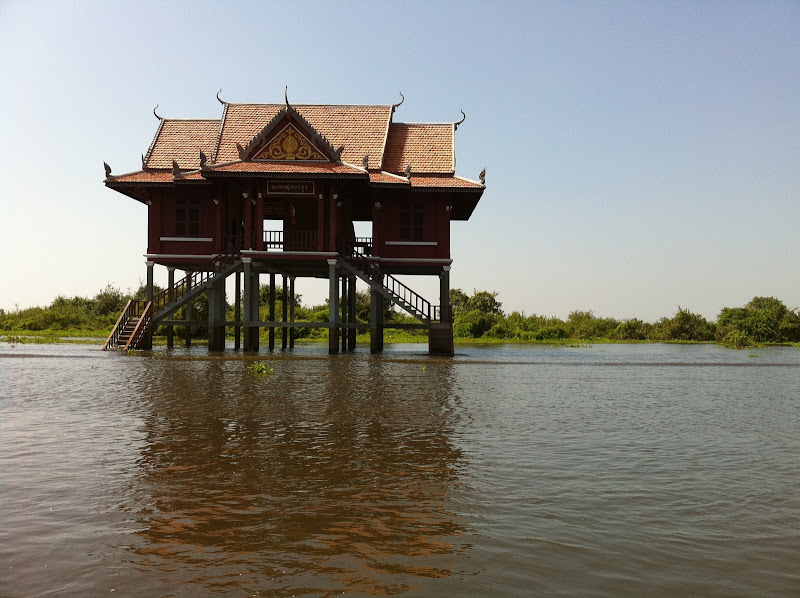 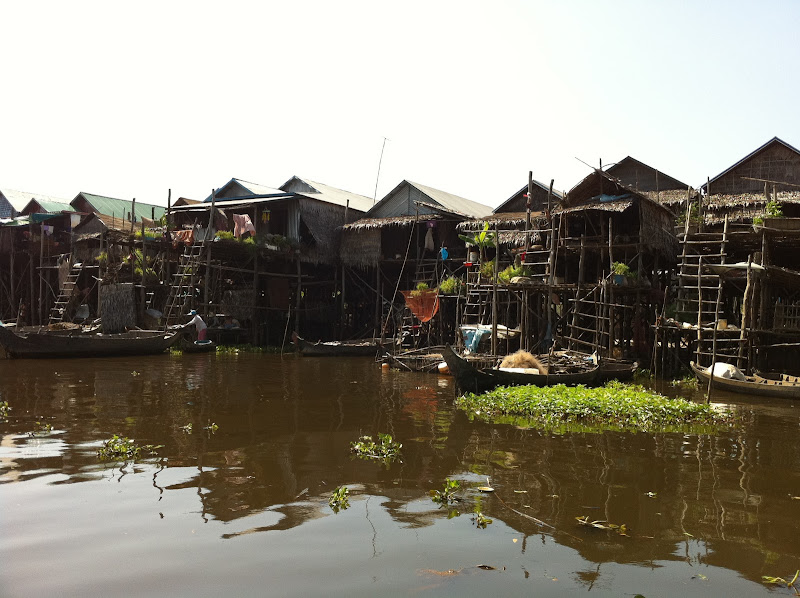 The Floating Village was very interesting and perhaps had we not had to eventually get back to shower and then get ready for our flight we might have enjoyed it more, but it was nice to have a little peek.

We headed straight back to the hotel to finish packing and shower to get ready for our flight to Phnom Penh.  We had a wonderful lunch and then Mr. Dina recommended a nice place for lunch, and finally we were on our way.

And then we arrived in Phnom Penh....and well, there's not anything uplifting to see in Phnom Penh.  All the tourist attractions are about death and killing, and the city itself is falling apart.  I know we were in Cambodia but it was really not at all what I had expected.  We stayed at Raffels Hotel, which was nice, but it just wasn't as welcoming as the place we had stayed in Siem Reap.  We got some work done and then went looking for food and ended up at a little place in a back alley eating spicy Cambodian food while a couple of guys tried to talk to us.  We were exhausted and didn't really want to talk but we were nice.  We called it a night and the next day we slept in, for the first time in a while, and then called my friend Ryan, who lives in Phnom Penh, who suggested we have lunch at the FCC (Foreign Correspondents Club).  We did enjoy some pretty good food and a nice view of the river and then things went down hill.  Let's start with....Bob and I were wearing the last of our clean clothes and figured we'd be okay because we had rinsed out some clothes that morning and they'd be dry by the next day when we were ready to check out.  Anyway, we left the FCC, and on the way down the stairs, I slipped and fell down the last three steps, don't worry, my butt broke my fall, along with my left hand which hurt a lot.  I scared some poor Asian tourists at the bottom of the stairs.  I'm tough, so we decided to continue wandering around and checking out the area...

Unfortunately it started to rain, and we were on a street that didn't have anywhere for us to go inside and we were soaked completely through.  I made the call to go back to the hotel and we hung out in our pjs for most of the rest of the day.  I had been wearing a pair of green pants that I bought in Siem Reap, and they had bled all over my legs, so my legs were dyed green, it was kind of gross.  Later at night we dried Bob's clothes completely with the hair dryer, and I put on my swimsuit and another pair of pants I bought in Thailand, and met up with my friend Ryan at the Cadillac Bar and Grill.  Yes, that was the name of it, and to be honest it had some really good food.  It was wonderful to see Ryan, he's really enjoying Cambodia and I was excited for Bob and Ryan to meet.  :)  We had a wonderful night!  We were out until late and headed back for bed.

The next day was a long one for us because our flight was at 11:55pm.  I'm not sure what I was thinking exactly, it had made sense in my mind when I originally booked the flight.  We were able to get a late check out from the hotel and checked out at 1:30pm, left our bags with the concierge and went to lunch.  We had lunch along the river again, at a place called Le Croisette, which was a cute little Italian place, it was pretty good.  We played some games on the ipad and then went to the Russian Market where I was able to spend money on more things I don't need.  We spent the rest of the afternoon there and I wandered about and left Bob to enjoy coffee and work on some things at a little coffee shop.  Really what we did all day was be lazy and shop and snack, we're really good at that.  We ended up at the FCC again, mostly so I could thieve some good free internet and enjoy a nice breeze and some drinks on the balcony.  I worked for a while and then we headed back to the hotel for our last 2 hours of waiting.

Finally it was time for the airport, we hopped in a cab and were on our way.  Everything was going great, we boarded the plane, we had a little snack and then I settled in for a nap.  And then something horrible happened, we were suppose to land in Shanghai at 4:30am, but at 3am we were told we had to land in Guangzhou because there was no visibility to land in Shanghai. We sat in the plane on the tarmac for about 6 and a half hours.  Yes, 2 hours longer than our flight was originally going to be.  We got home at 12:30pm and wanted to die.  We managed to stay awake and re-register with the police.  (We have to register every time we enter China.)

And that was the end of our adventure.  We were really happy to finally be home.