I didn't want to get out of bed the next morning, but knew that we were in for a day of ruins wandering and picture taking, so I dragged myself out of bed.  We promptly left the hotel at 7:30am.  Mr. Dina had suggested we leave early in the morning to avoid some of the larger tourist groups, and I do think this made a big difference at the beginning of day.  Later in the day it really didn't matter, but we seemed to have the morning ruins mostly to ourselves.  It's $20 USD to get in and see all the ruins in the main area, which is quite a deal considering there are so many.  (On a side note, while Cambodia does have their own currency, they use USD mostly and when they do use their currency it's to represent cents.)  We got our day passes and headed in to see everything we could.

We started off at the South Gate Entrance of the walled area of Wat Thom.  There's a magnificent temple with 56 spires that have four faces, one for each direction, on them.  It's pretty amazing that people carved all those faces and they all look so similar. 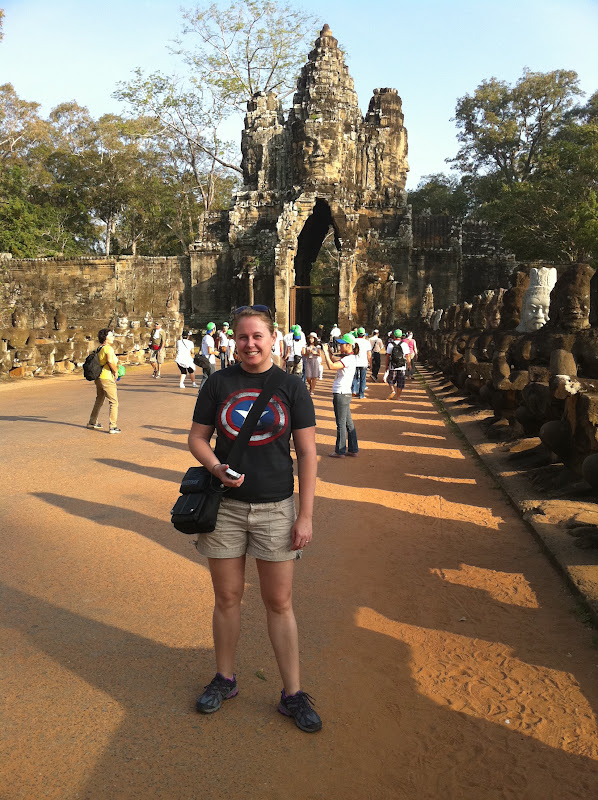 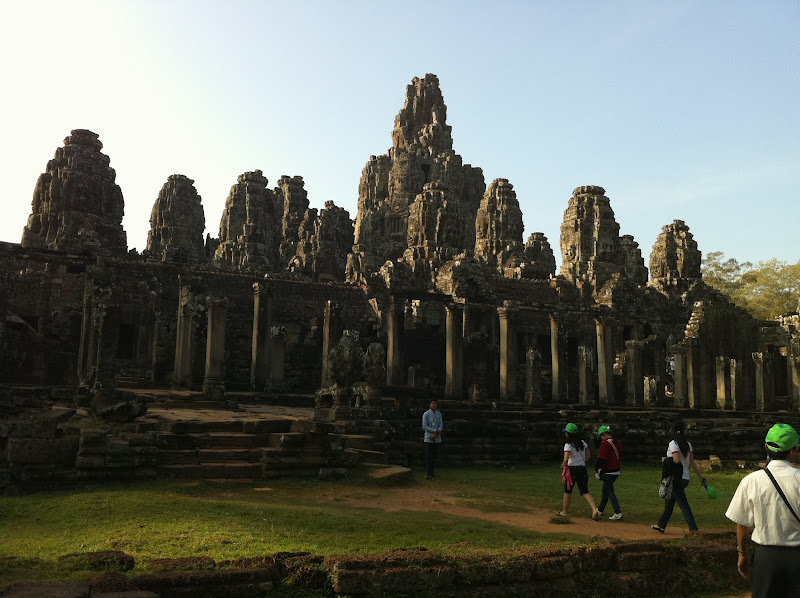 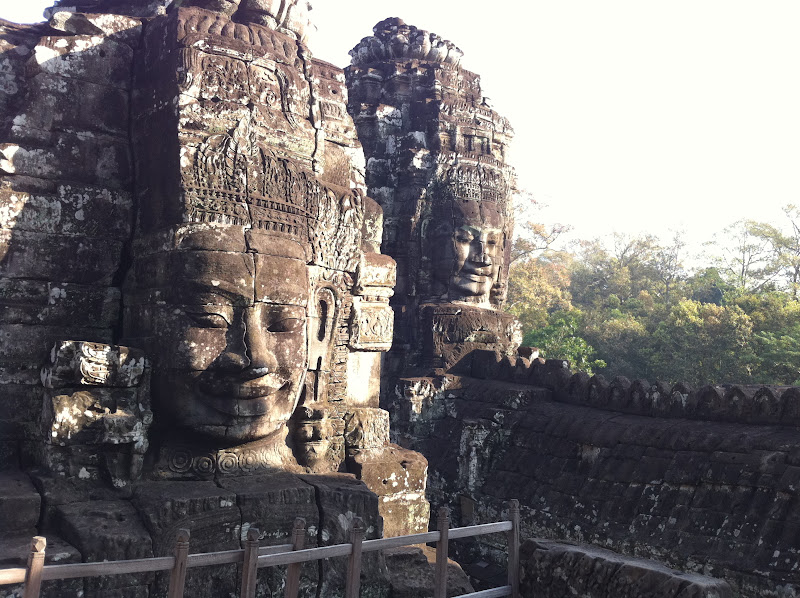 After that temple we wandered through the main area of Wat Thom, which is huge, there are small ruins all over the place and then larger more intricate walk ways.  I was really impressed by all the carvings along the walls of some of the walk ways. 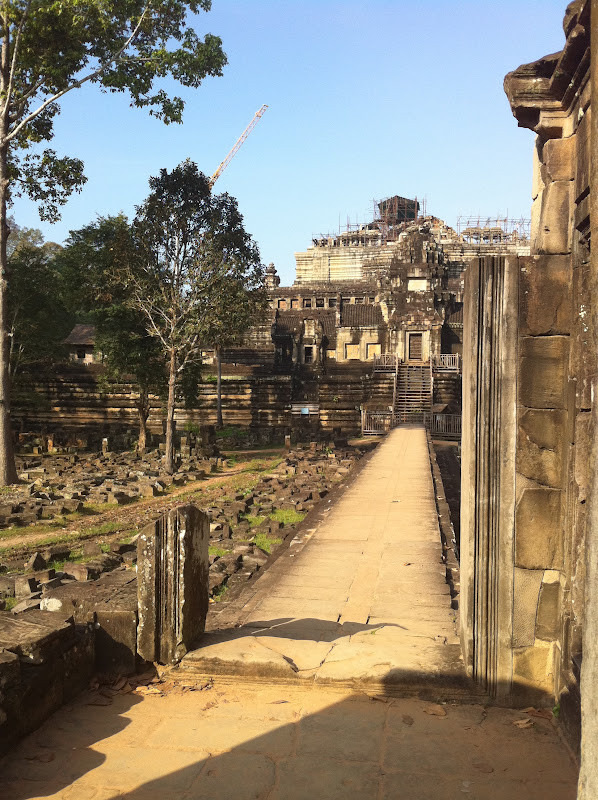 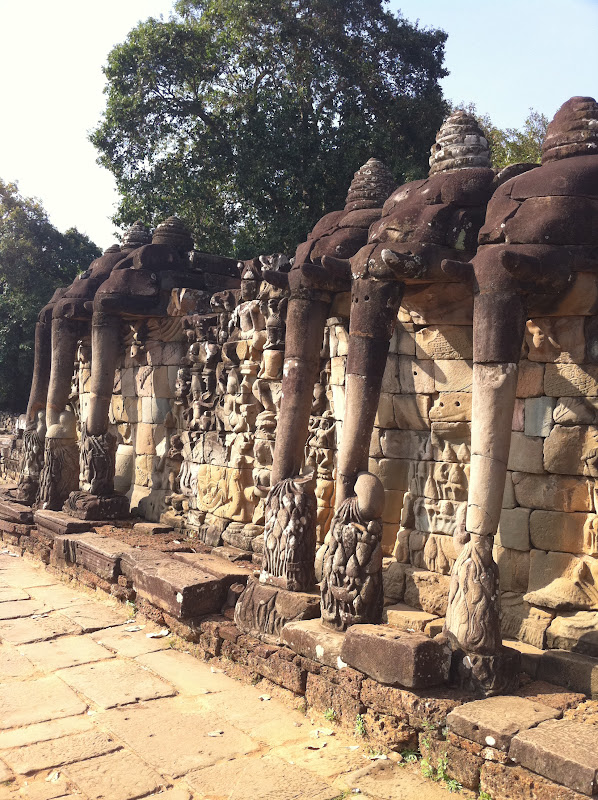 After we walked through the giant Wat Thom area, which took us about an hour and a half we went to what the locals call the Tomb Raider 1 Temple.  I guess that the second Tomb Raider movie was filmed here and at a second temple that we will eventually get to (in the next blog post).  The Tomb Raider Temple was mostly neat because of all the giant trees growing all over the place, most of the things were in a more ruiny form than what we'd seen so the detail wasn't as visible, and they're doing a restoration project right now so there's a lot of work going on. 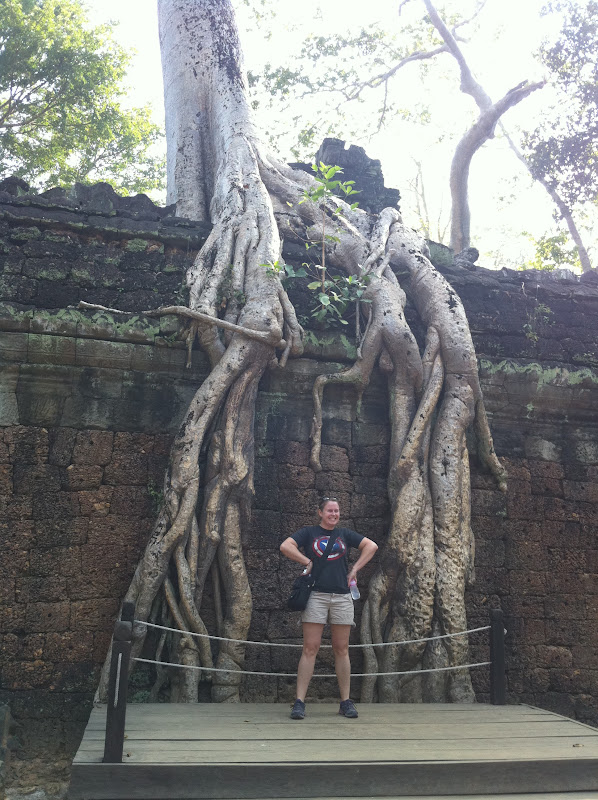 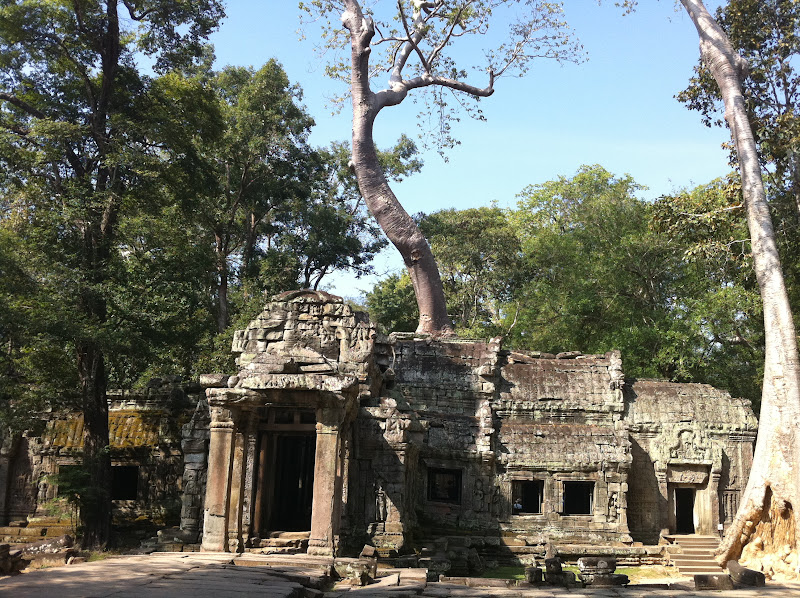 After the Tomb Raider Temple, we went to a smaller temple that was dedicated to women.  It's kind of like a miniature of the other temples and it's a completely different color, kind of a pink red.  I thought this one was nice because all the detailing was more precise. 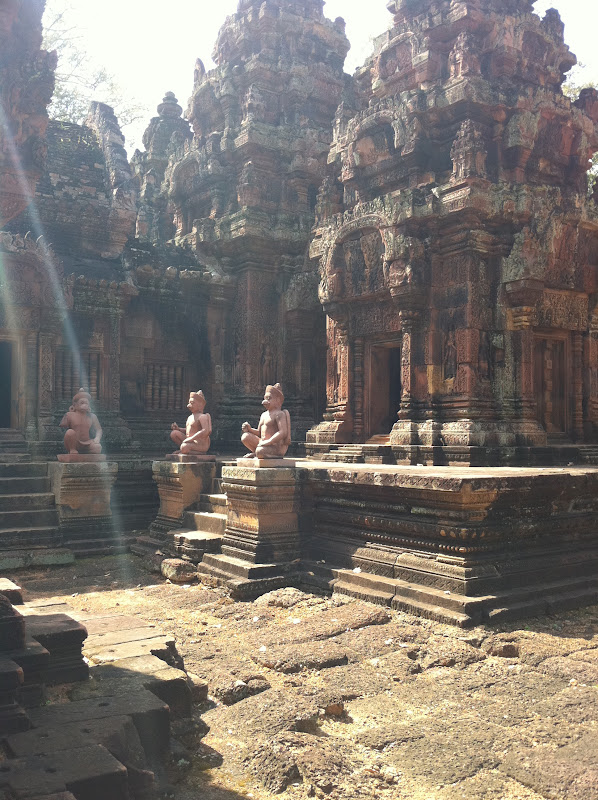 There was also a little market down the road from the lady's temple and I bought some local currency there that's in great condition.  I'm going to have it framed, yes, I know I'm a weirdo.  But it's really pretty money.  After our market adventure and the lady's temple Mr. Dina suggested a place for lunch and it was delish.  We had a really good yellow curry with shrimp served in a coconut, and a sweet/sour beef salad and a pork dish that was really spicy.  We were thus far quite pleased with Mr. Dina's suggestions and he was taking excellent care of us.  After lunch we headed on to another temple, I'm sorry to say I cannot remember the name of it for the life of me, but Mr. Dina said it was one of the smaller not was well known temples, and it was here that I was scammed by a little Cambodian boy.   There I was telling this nice boy that I did not want to buy anything from him and when I turn to walk into the ruins he grabs my hand and puts a bracelet in it and says, "This is a gift for you."  I try to give the bracelet back, I thank him, I say that's so nice of him to give me a gift but that I really don't need it. He tells me it's a gift and he will not take it back.  I should have just thanked him and walked away, that would teach him not to do this to people in the future, but I buckled and I said, "Okay, I want to buy 1 bracelet like this one."  And he says, "No, you have to buy them as a set."  As in, a set of 5.  Sneaky bastard.  I repetedly tell him I only want one, and he keeps telling me I have to buy the bundle because it's to "help his business, it's good for you good for me."  I bought 5 bracelets for about $1.25USD it wasn't the cost, it was the not wanting the bracelets in the first place that annoyed me.  The kid was a born salesman. 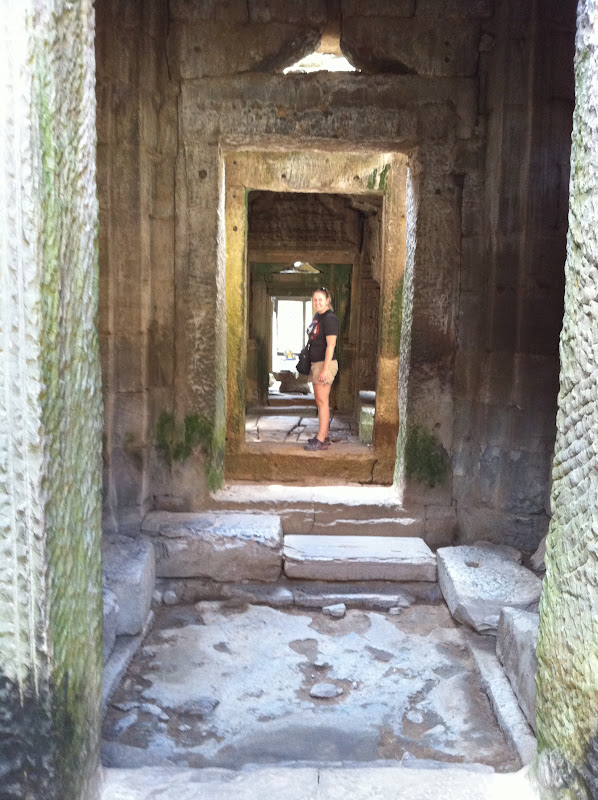 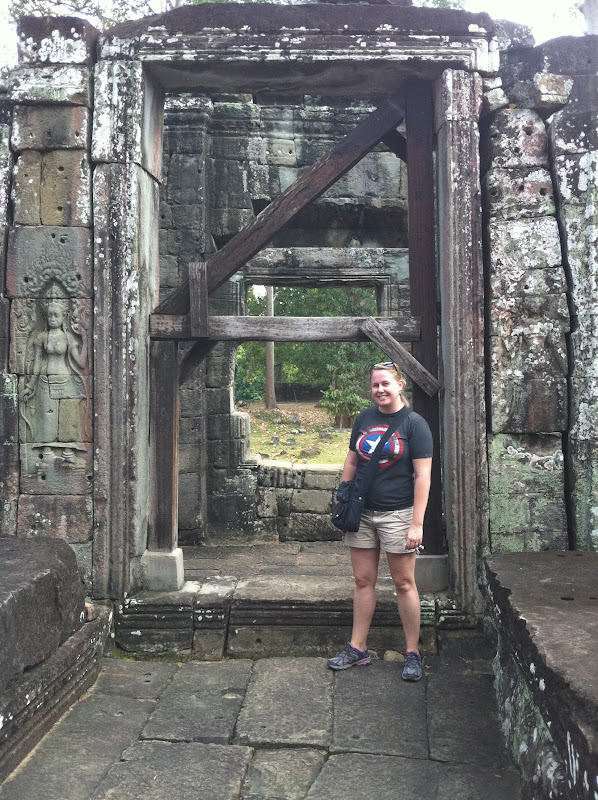 And then, we went to Angkor Wat.  The place we had actually come to see in Cambodia.  Mr. Dina dropped us off behind the temple and we got to walk down this nice road of trees and then suddenly there it was.  With monkeys. 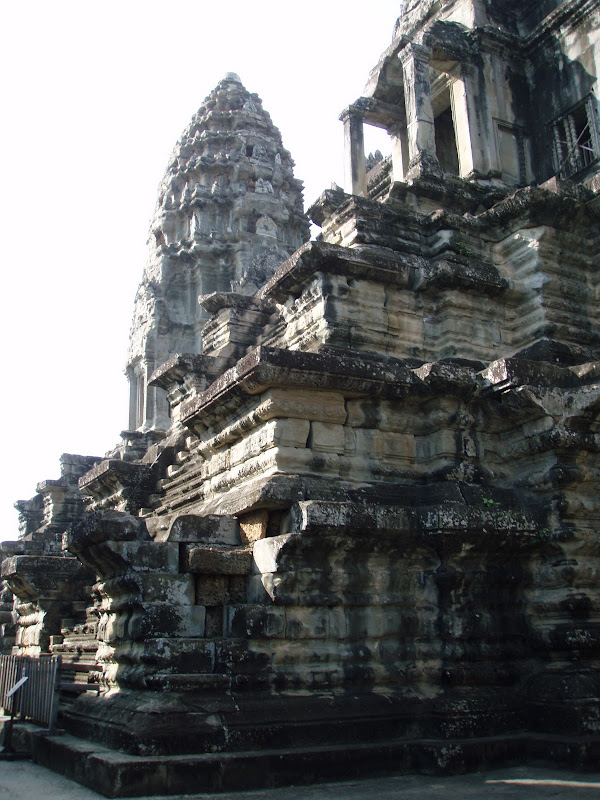 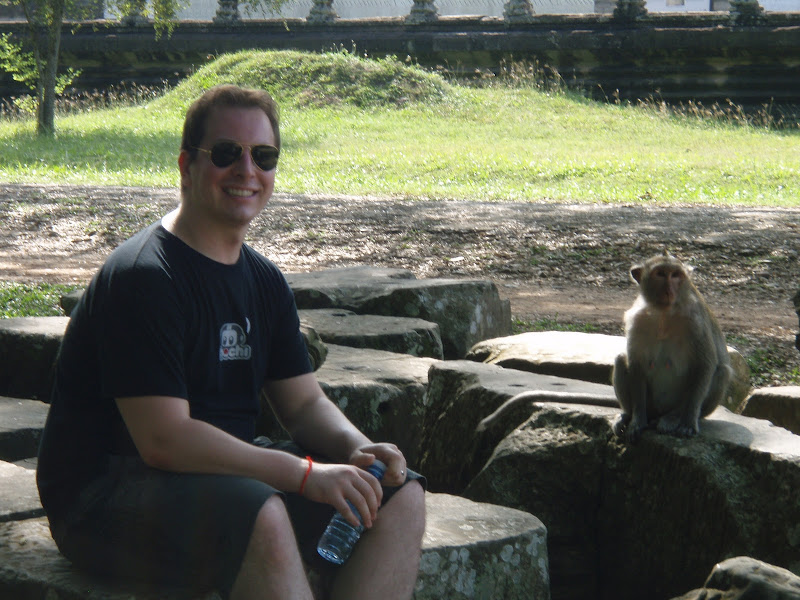 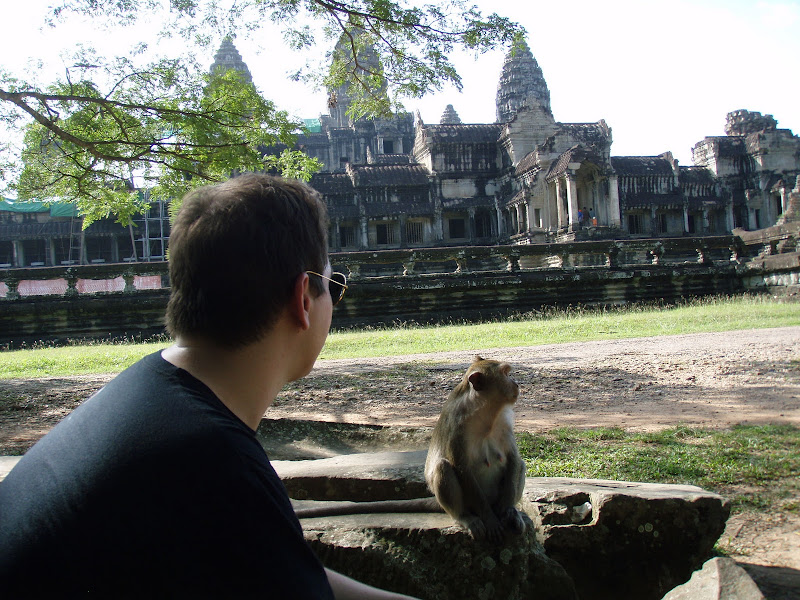 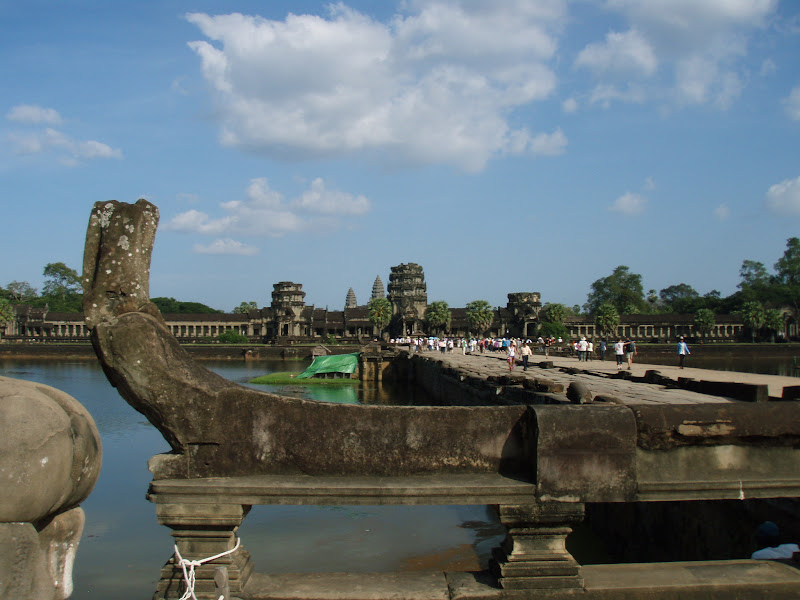 After Angkor Wat we, well I was exhausted and it was so hot.  We were disgusting, but Mr. Dina had one more place to take us.  There's a place on top of a hill top where people like to hike up to it and watch the sun set, it's got a nice 360 degree view, and even though we were gross Bob made me walk to the top.  And then he made me climb to the top of the ruins which had tiny steps.  I thought the Great Wall was perilous, but these were even scarier, check out me walking down the steps: 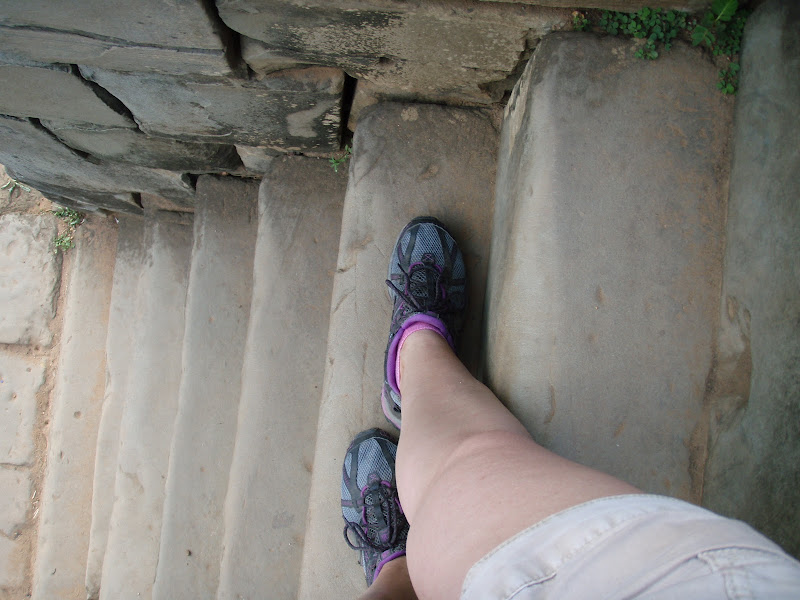 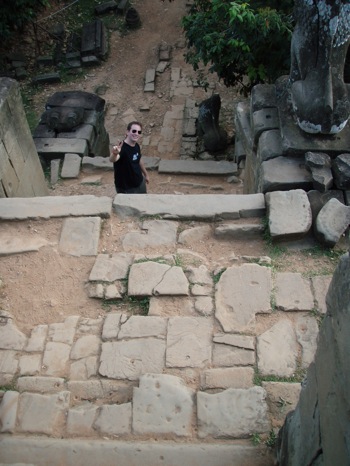 That's Bob at the bottom of the stairs looking up at me.  The steps were crazy!  We hiked to the top, and were disappointed to discover that there were elephants that we could have ridden to the top.  Damn, we'll have to save that for next time.  We ended up not staying until sunset because we would have had to wait for an hour and we needed a break.  So we headed back to the hotel and took a dip in the pool which was very nice and then Mr. Dina picked us up for dinner later that evening.  We ate at another really cute little place and again had delicious food. 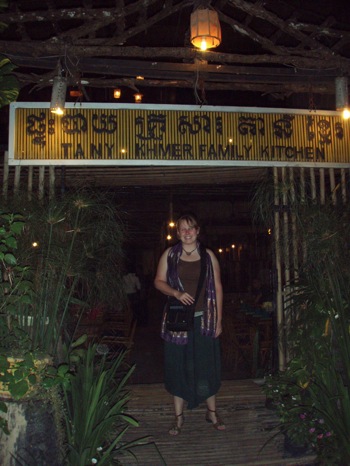 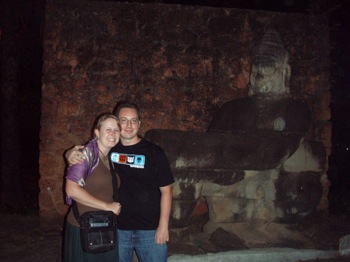 We ate good food, took a nice little rid in the tuk-tuk around town and went to bed thoroughly exhausted and ready to play the next day.

More to come, stay tuned for the last of the trip!