The Jay and Staci Adventure in Shanghai! BAM!

Jay and Staci arrived on January 6th.  They got in at the airport at 5pm, made it to our place at 6:30pm and then we did what any good friends would do, and made them go to an acrobat show!  We  went to the acrobat show at the Portman Ritz and Jay was pulled up on stage to participate in the "knife throwing" segment.  He was a really good sport and we had a good time.  Everyone was exhausted at the end of the night so we crashed early.

And then we made them party hard again the next night when we re-lived New Years and went out for teppanyaki and then KTV!  We sang our faces off and ate delicious teppanyaki at Natural Point.  We went for teppanyaki because Jay and Staci have a New Years tradition of going to Benihana on New Years and last year we went out with them, and we were sad that we weren't able to participate this year.  I know, you don't feel bad for us, we were in Hong Kong after all.  We had a great group of people and had a really great time. 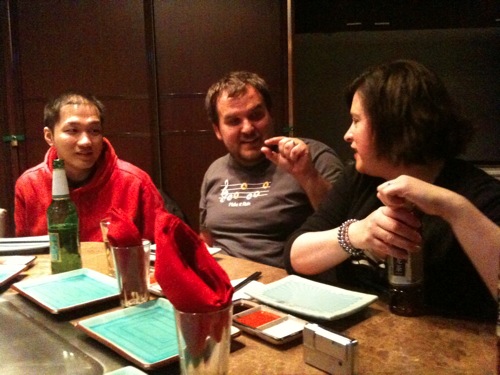 We needed to take it easy the next couple of days because of all the crazy fun and excitement.  While Bob and Jay went to work Staci and I would work from home in the mornings and then go wandering about in the afternoon.  ﻿I believe this was the day that Staci and I went to Xintandi and bought the world's most awesome leg warmers ever.  So awesome that we later had to go back and buy more.  That first Monday night we of course all went to the BullDog Pub for the quiz and discovered that our quiz master had made the questions super hard!  We had our butts handed to us by that quiz and we tried our best.  It was still a fun night though and we had a good time.

Tuesday Bob and Jay played hookie and we went to the Fabric Market so Staci could have some fun clothes made like mine.  We took one of my old button up shirts from England as a template and had some kickbutt nice shirts made and Staci had a pair of pants like mine (originally from Express) made.  And then Jay and I convinced her she needed to get a jacket.  Mostly because I love my jacket, it's the best, I seriously wear it all the time.  She reluctatnly agreed to get a jacket, but when we picked it up later she loved it.  I'm so happy because she looks great in the new jacket.  Bob also got fitted for a new coat, it's very nice, a wool kind of military style black/grey jacket.  He looks very good in it, but whines that the pockets aren't right.  I keep telling him we can take it back and have those fixed but he just sighs.  After our trip around the Fabric Market we stopped at the most amazing DVD store.  There was a secret doorway that led up to where all the...."real" dvds were.  It was pretty amazing.  We then went for a foot massage and snacks.  Yes, you read that right, we went and had our little toes rubbed while we had pork buns and drank tea.  It was very relaxing and we were able to watch one of our newly purchased DVDs.  (We watched "Baby Mama," with Tina Fey.)  Over all it was a good day, and we had a wonderful time.

Wednesday was kind of lame, we all went into the office and worked.  Things needed to be done and I had a meeting with our new Chinese game approver who is doing a crappy job approving games.  Okay, he's not doing a crappy job approving them, he's doing a crappy job rating them appropriately.  Eric helped me talk to our approver because, surprise, he doesn't speak English.  I still don't think he's doing a great job, but I was able to get the SF to hire my awesome friend David to also do approvals so at least some of the games are being rated appropriately.  The exciting part of the day was when we went to Master Kong's for lunch.  I love Master Kong's, it's always good.  I always order the same thing- okay,  I did branch out once, but it wasn't nearly as good.  I love the #116, the spicy beef noodles.  There are three spicy peppers next to the picture in the menu and it's delicious.  Wednesday was also the day that I had to write to USAA's customer support because they'd managed to send me a replacement AMEX card that didn't have a validation pin.  I even took a picture of the card so I could send it to them for proof. 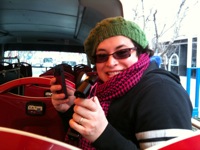 Thursday Staci and I worked in the morning and then took the Big Bus Shanghai tour.  We bundled ourselves up real good and headed out for a day of fun.  So the bus tour is a hop on / hop off tour but we mostly sat on, and just looked at everything in the city.  It was really bitter cold that day.  We did a couple of stops for coffee and took pictures from the bus.  The first time around the city in the bus we listened to the audio tape provided, and the second time around we just had a good time looking out the windows and chit-chatting.  The first time around we sat up top on the second floor of the bus which was open air and freezing, the second ride was far more comfortable and inside the bus.  At the end of the tour we did some shopping in the mall area under People's Square and bought fabulous wigs which we wore for the rest of the night.  When Bob and Jay got home I'm pretty sure they thought we were crazy, good thing they love us.  We went to Yakexi for dinner and then met up with some other people at Rhumerie Bounty, the pirate themed rum bar just down the street from out house.  It was a crazy night, we shut down the bar and stumbled home. 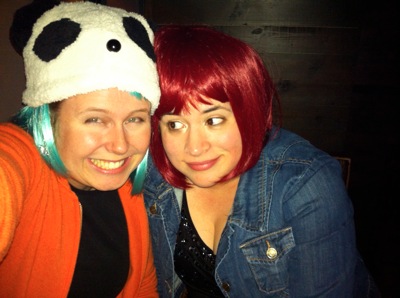 Stay tuned for the rest of the adventure in the next post!