Let's Celebrate the Year of the Rabbit! Shanghai/Suzhou style!

Before I get into the awesomeness of Chinese New Year, here are some photos of the lovely bridge we drive over to get to and from work. 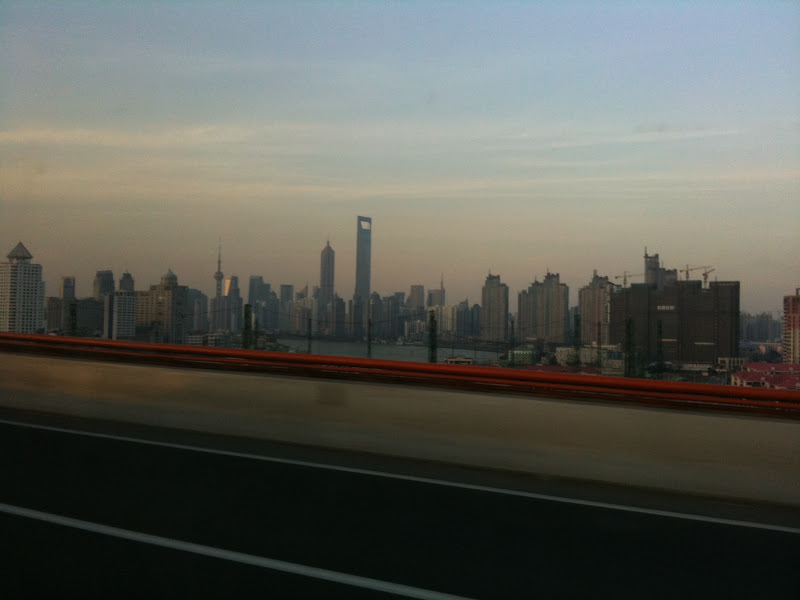 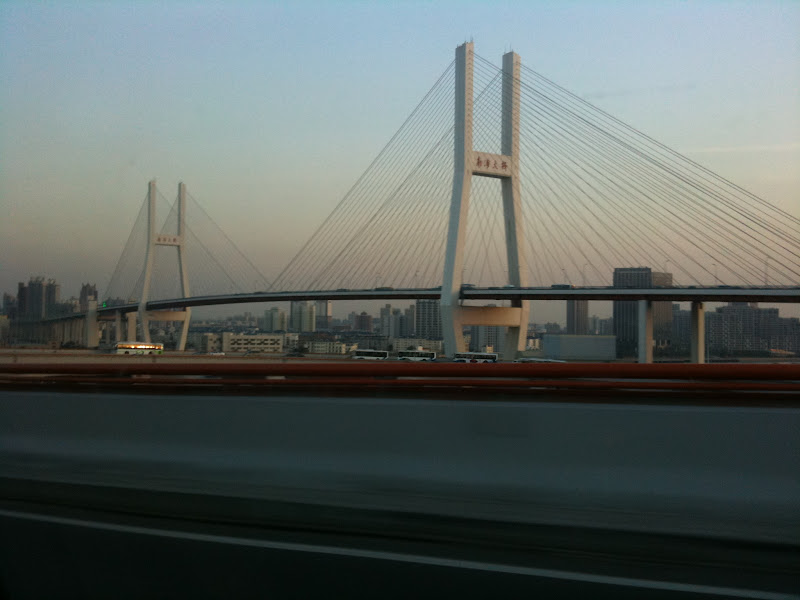 It's a pretty impressive bridge, and I was very pleased to get such an awesome shot, especially while in the car.

Okay, so on to Chinese New Year.  Patrick invited Bob and myself to go to Suzhou where his brother lives.  It's a thirty minute ride, by train, outside of Shanghai.  We took the train with Patrick and his friend Tim.  We did almost have an issue because we got to the train station and we realized that Bob and I didn't have our passports, which are needed to check into hotels anywhere in China.  Crazy, I know, even though we live here we still have to take our passport with us.  Luckily we live really close to the train station so we were able to run home real quick and get back in time.  The train is very nice but it's hard for us to get tickets because of our limited Mandarin speaking abilities.

Patrick's brother is the executive chef at Zapata's, a Mexican restaurant, in Suzhou.  We arrived on Chinese New Years Eve in time for all the fireworks displays at 8pm.  We had delicious pulled beef tacos and some great cocktails while we enjoyed the fireworks.  The restaurant was close enough to the hotel we were staying at so at around midnight Bob and I headed to check-in.  As we approached the front of the hotel there were a bunch of people gathered around a bunch of boxes filled with fireworks, which they set off about an hour later.  There were fireworks all night long, it was like we were being bombed.

We stayed at the Crown Plaza, and it was the nicest Crown Plaza I have ever seen.  It's built right out on the lake and looks like a giant cruise ship departing into the unknown.  The whole interior is nautical and there's an excellent collection of weird knick-knacks through out the entire lobby and lounge areas.  The room itself was pretty swanky as well with a view of the lake and a gigantic bathroom with a HUGE bathtub, the bathtub was so big I could lie back in it because I'd slip under the water, it was crazy!

On the first day of the Year of the Rabbit we met up with Patrick, Tim and Jon around 1:30pm and headed into downtown Suzhou which was over run with people celebrating the new year and wandering about.  I imagine it's like black Friday, there were people everywhere.  We wandered around for a bit just looking around and got lunch at Master Kong's, yes you've heard that name before....we love it and it was really convenient because there were so many people everywhere.  We did some shopping about and took some fun picture of things that didn't make sense, like:

I don't know what "Nuclear" is but this shop sells it, along with silk and jade.

The whole day was pretty relaxing with us just wandering around and enjoying the sites.  As it started to get dark we all split up to go back to our respective hotels/ homes for a little more relaxing and time wasting.  For dinner Bob and I met up with Patrick and Tim at some of the bars over in Suzhou's ex-pat area.  We met up at a bar called Tunnel which was playing some excellent 90's music and had a couple of drinks before grabbing some Korean BBQ for dinner.  We ate at a place that's a 24 hour Korean BBQ, who knew such a thing existed!  Dinner was pretty good and inexpensive and we went back to Tunnel to hang out for the rest of the evening.

The next morning we gorged ourselves at the Crown Plaza lunch buffet and it was pretty good.  Lots of sushi, and a variety of dishes from all over the world.  I was even able to have a baked potato with sour cream and bacon bits.  We ate and ate and ate so much food, and then at 1:30pm it was time to head back to the train station for our return to Shanghai.  Which is when my Chinese New Year started to suck because I ended up with the world's worst sinus infection.

I was laid up and in pain all that weekend.  We ended up going to the doctor that Monday because we thought I might have pneumonia.  Thank goodness it was just a really nasty sinus infection.  I had an awesome smokers cough and kept poor Bob up all the night with my coughing and tossing and turning.  Bob took excellent care of me while I wallowed around in pain and agony.  Now I'm all better though, I got some great meds.

That same Monday night (January 8th) our co-worker from San Francisco, Nick, arrived.  We cooked stir-fry that night and just relaxed and caught up with Nick. We were really lucky, as was Nick, that it was still a holiday on Tuesday so we were able to go on a small adventure about town.  We took Nick over to Taikong Lu and have Kommune for lunch and looked in all the shops and bought more tea and other fun things.  Nick bought some tea too.  Oh and I had a bowl of mocha, which is always delish.

We've been eating, working, sleeping and then repeating that process for the last week and half.   I can't complain, I love to eat.  More on that later.