After Staci headed back to SF to prep for her classes and party like a rock star we had Jay for another week of fun and excitement.  I led a pretty boring life during the week cleaning up around the house (sorta) and working.  I had been a little lax with the support queue while we had guests because it's so much more fun to have fun than to work.  It's a problem.  Anyway, Jay and Bob brought me some wonderful schwag from the office that week.  I have a new magnetic Mochi calendar thanks to the Mochi China Marketing team.  It's sitting on the dining room table right now while I ponder how to pack up all my goodies to take home.  (There's a picture of the calendar to the left, all the little square pieces are magnetic and you move them around to show people how you're feeling that day.  If you'd like a calendar let me know and I'll grab one for you.  On a side note, Mary, you already have one on it's way, whether you like it or not.) 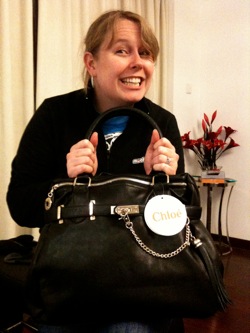 We also discovered a wonderful and magical place called....The Fake Market.  Yes, we found the place where dreams are made, well dreams and wonderful knock-off goods.  I went crazy and bought 3 "designer" bags and 2 pairs of "D & G" sunglasses, and yes Tom and David, one pair is white!  Jay picked up an awesome set of the "beats" headphones like Bob and I have.  It was a good thing that Bob and I had our actual headphones with us so we could help Jay get the best quality in comparison to the real thing.  Jay also picked up a very nice brown leather laptop bag for a very reasonable price.  I want to say he paid 230RMB, maybe 250RMB, the point is it's a great laptop bag, made of leather and it only cost $37USD.  Now that's a deal.  My bags cost a total of 550RMB, that's 3 really nice leather purses/bags that are all convertible (over the shoulder/messenger bag) for $80USD.  I was quite pleased.  That's me to the right clutching one of my bags.  This is supposedly a  "chloe" bag, to be honest I'd never heard of that brand before, but I did really like the bag.  I also picked up a Marc Jacobs with the model number "#_ _ _ _ _ _" yes the model number was a bunch of blank dashes.  I think that might be why I really like it.  It's also a massive bag, I could carry a bowling ball in all of my new bags and not think twice about it.  I'm willing to admit I have a problem, a problem with buying things just because I can.  That's one of the reasons I have not been back to the fake market again.  I'm afraid I'll buy more bags that I don't need.

Bob chose not to get anything at the Fake Market and I'm pretty sure just wanted to die the entire time we were there.  He has a hard time looking at the same things over and over and over and over again.  I know I'm looking at the same things but sometimes, just sometimes there's something different and that's when you get an awesome deal.  Bob doesn't like to wait for the awesome deal.  He was very helpful when I wanted some cashmere hoodies though.  (There's a back story to this.  I own two really awesome cashmere hoodies from Old Navy.  Yes, Old Navy put out cashmere hoodies one Christmas and they didn't sell very well because people who shop at Old Navy typically don't expect to pay over $40 for anything in the store.  Anyway, I wear my hoodies all the time and I've always been sad that I didn't get a red one when I had the chance.)  We found a store selling very similar cashmere hoodies to the ones I wear all the time but the woman running the store was a nasty you-know-what and didn't want to haggle the price with me.  She kept trying to tell me that her sweaters were better than the one I was wearing which was simply not true.  Bob was eventually able to get her to sell me two sweaters for the price of one.  Hoorays!  I now have a nice dark red cashmere hoodie and a purple cashmere hoodie.  I'm the luckiest girl ever.  And they're "supposedly" from real mongolian goats.  I don't know that I believe this at all, but the sweaters are comfy!

And now, for the moment you've all been waiting for.....we went to a Chinese Wal-Mart!  Now I've been pretty pumped about going to Wal-Mart in China ever since I read this article: 16 Items They Only Sell At Chinese Wal-Marts.  It was truly an eye-opening and overwhelming experience.  We touched everything, and took pictures of everything.  I tried to find everything on the list, but sadly there were no crocodiles.  I know, I was also disappointed.  But to cheer you up, here's a collection of all the things at Wal-Mart.... 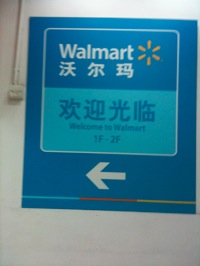 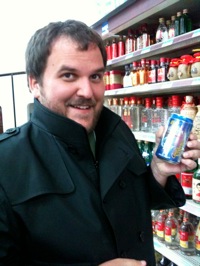 Sorry for the pictures being spaced strangely I'm still trying to figure out what the problem is.  I can't seem to get rid of all that extra empty space.  Once day I'll figure this out. Anyway, here you have the entrance sign, an upside down pyramid of Budweiser, and Jay looking mighty happy. 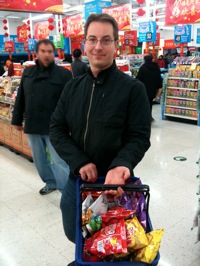 Above you can see that Bob was my sherpa in the store, and Jay is apparently from the horror flick "the ring" based on the look he's pulling.  The can of "great value" is wal-mart brand beer, yes they have their own beer and the last picture up there is of meat.  Just random meat.  I'll go ahead and leave the other picture un-captioned. 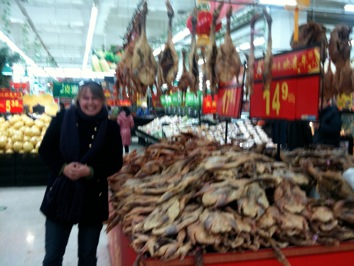 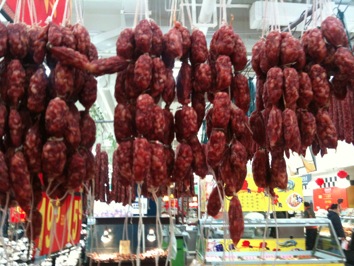 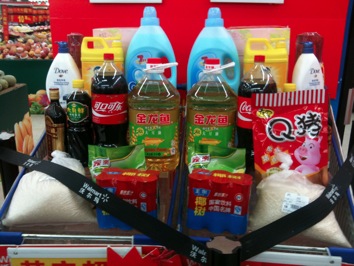 It was a very exciting adventure in Wal-Mart.  As you can see we were mostly impressed with the meats and alcohols.  It was an excellent evening excursion.

We were pretty laid back the rest of the time we had Jay, and we made it to Yang's Fried Dumplings once more, the day he left before we said good bye.  Here he is with his dumpling dish: 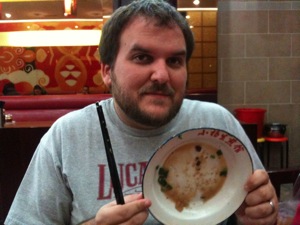