Mochies of the World Unite!

I've been terrible about updating the blog for a while, so as things usually go when I've been bad, we're going to see a mass posting of things for the last month and a half to catch everyone up on how life has been.

In the middle of December we were lucky enough to play host to some of the Mochies from San Francisco who came out for a board meeting.  (Ick to the board meeting, hoorays for seeing great peeps.)  We had an exciting week of non-stop eating and fun, well that's how it's been for me.  I think Bob would tell you it  was been a lot of extra work. 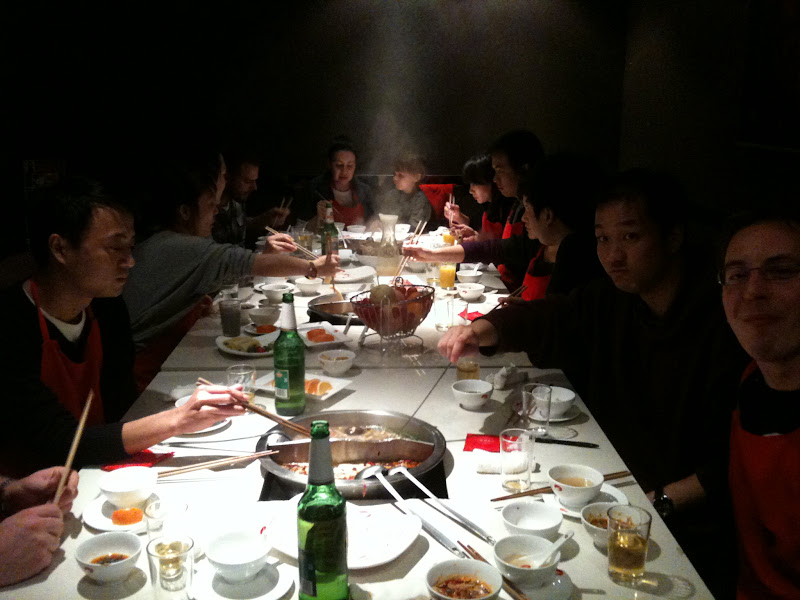 Moshen was the first to arrive and we went to dinner with him on Monday night, and skipped the Pub Quiz.  We had delish Schesuan food at our favorite Xufing 131.  Bob and I have become pro at ordering food at this place and because I got there first I made the main orders.  We had so much food, we always have so much food!  We also had Patrick, Eric and Yoko so we had a great mix of people.  The place has these really excellent spicy chicken wings, and a great shredded potato dish.  We were all pretty tired, especially poor Moshen who had just arrived so we called it a night and headed home.

I made plans for all the Mochies to have dinner at another place on Tuesday night.  We went to South Beauty, I picked it because it has a good collection of different dishes from all over China.  It was a really great group, we had Sean, Patrick, Eric, Yoko, Ryan and his family (Jen and their two boys), Justin and Bob and myself.  We had our own private room and a huge table.

The week was really all about eating and drinking at various places.  We took everyone out to Hai Di Lao for awesome hot pot and some of the guys tried pig brain.  I refused, but Bob was all about it.  We had a huge group of people and we had our own private room.  We had Ryan and his entire family there along with, Mohsen and Leslie, Jameson and Katie, Patrick and Yoko, handsome Josh made it as did Sean, who we hadn't seen for a long time.  Some of the guys went out for KTV later, but I went home, I know I'm lame.  Bob went and it was apparently a great time, oh well, I'll go next time.

I also took a cooking class this week, and learned how to make springrolls.  While the springrolls kind of turned out bland I have great ideas for making mexican springrolls.  I'm thinking steak chunks with onion and red peppers.  YUM!  And then we'll dip them in salsa, mmmmm. 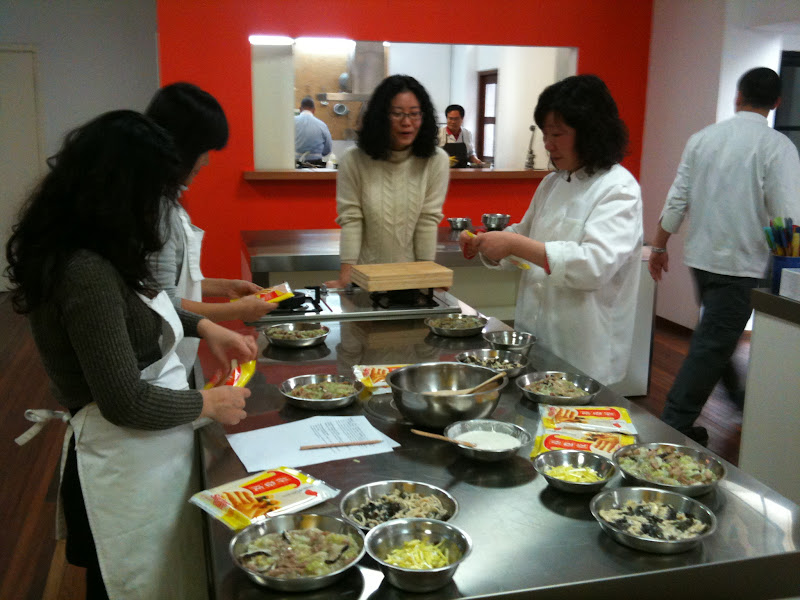 I was really excited when I found out that Leslie and Yoko wanted to go to the bath-house with me!  I couldn't believe it, I've been trying to find someone to go with me for a while now.  We met up early on a Monday morning and headed out to New Star.  I'd read all about this place, and Jameson and Katie had said really good things about it.  It's a Korean run bath house, and it was awesome!  Nothing says bonding time like getting naked with people you barely know.  We hopped in the hot baths and then got scrubbed down real good.  It's gross to see all the old dry skin that they've scrubbed off.  And then we enjoyed a nice massage and then korean lunch, it was wonderful.  I can't wait to take Staci there when she comes to visit.  :)  We got our own little pajama sets to run around in, and there are hot lounge rooms that you can relax in and areas to just have a good time.

Everyone parted ways the week of Christmas.  Leslie and Moshen headed to Beijing, Ryan and the family headed to Hong Kong, as did Justin, and Jameson and Katie ran away to Taipei.  Bob and I ran off to .....Tokyo!