After we got up in the middle of the afternoon we hydrated, and showered because we stank of cigarette smoke from the bars. 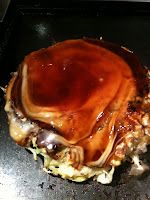 As I said, we roused ourselves at about 3pm and started our day. We decided to take it really easy that night, and we went out for some food that Bob had been told about called Okonomiyaki. It's like a Japanese Pancake with savory food on the inside, so kind of like a Japanese crepe. We ordered some kimchi fried udon noodles and got they special of the house. The food was okay, there was a lot of squid, and mayo on the main dish. But it was okay because Bob took me for Nachos afterward :P 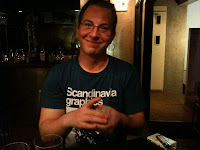 We then headed to a little bar near the hotel called "Blood," yes ominous, but actually quite nice, even a little swanky. We played Uno and had a beer while the bar showed a movie on the main wall. We were the only customers for most of the evening. We called it an early night, and went to bed, because even rockstars need to sleep.

On Friday the 17th we went to the Tokyo Game Show with Bob's friend Jason. We got to see the booth babes and look at all the fun games. It was much smaller than China Joy. I have a wonderful new messenger bag that Jason bought for me, it's got the logo for TGS this year on it in bright pink. We spent the afternoon doing that because the conference was being held on the outskirts of Tokyo and it took a while to get there and back. After getting back to the city we went to dinner at an italian restaurant. I didn't really take pictures because I feel like everyone knows what pasta looks like. Bob and Jason did find a nifty machine on the street that cleaned their glasses using sonic waves. Weird, but interesting. 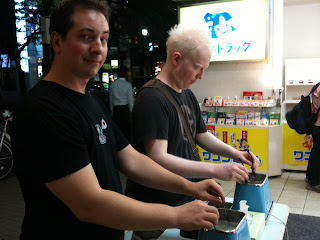 On Saturday we went back to Harajuku because I was bound and determined to see those girls in their CosPlay outfits but sadly we didn't see any of them. I think Harajuku Girls are a myth, I've been to Tokyo twice now and have yet to see them. We did some wandering around and just had a nice easy day of snacking and wandering. We did find a great place for dinner. The place didn't even have an english menu but specialized in pork. And the guys running the place were soooo nice. It was a pretty tame day and we went back to the hotel to pack and get ready for our departure the next day.

We had our last lunch in Tokyo at Pepper Lunch, which was delish, and then we headed over to the post office to mail off some things for the office. We took a bus from the hotel to the airport and had plenty of time to get ready for our flight, which was good since security decided to be a pain in the butt. For anyone who has not heard the story....

So there I was was going through security. I'd taken off my belt, opened up my bag of liquid, had my laptop out and had taken off my shoes. I walked through the metal detector and got the okay, and then I was asked to step aside. It dawned on me that security probably wanted to look in my bag because I was carrying little packets of laundry detergent in my bag, which probably looked suspicious on the x-ray machine. But then the lady asked, "excuse me ma'am, do you have a gun in your bag.?" ...to be continued in the Beijing write up.

Email ThisBlogThis!Share to TwitterShare to FacebookShare to Pinterest
Labels: Tokyo