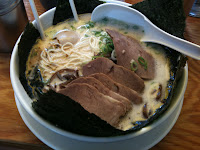 The next day (Monday) we checked out a Ramen place that Jameson and Katie had suggested. We had a creamy miso based ramen with sheets of seaweed and pork slices. The portions were huge! The woman who ran the place was really nice and took excellent care of us. After lunch we were lazy and settled down for tea and matcha in the hotel lobby/lounge area. I had a lot of work to catch up on so we spend most of the afternoon working. Sad I know, but hey, I was working in Japan! 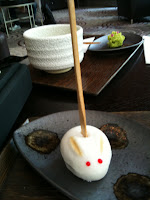 After our working we decided it would be a good idea to walk from Shibuya to Shinjuku. That turned out to take FOREVER. It was much further away than we had anticipated. We stopped in at an arcade for a little while to cool down because it was toasty outside. We were heading up to Shinjuku because after we walked around we were going to meet Bob's friend Ian in Ikeubkuro. We barely made it and had luckily cooled off and didn't look quite as disgusting as we had earlier. For dinner we went to a yakitori place and had lamb, chicken and beef on sticks. It was pretty good, and Ian and his wife are really nice. After dinner they took us to a giant electronics store because Bob needed some new head phones. We made it back to our hotel stuffed with food and with new working headphones.

The next day we puttered about in the morning and did some work and then went out for Katsu in the afternoon. It was so much food, I had a fried shrimp, fried pork cutlet, fried pumpkin wedge and a fried cheesy thing. It was delicious. After lunch I had to do some work because I'd been falling behind with all our wandering around so I caught up on work and then we decided it was time to go to Shinjuku to party like rockstars. We had an amazing night. We went to a tiny little bar called Rock Bar Mother. It was in a little basement room and could only hold about 10 people. It was cool because they had a music list and you picked out what you wanted to listen to and the bartender would hand you a stack of cds. The place only played Metal Rock, and had been recommend by a friend of Bob's, and we had a good time. We stayed for a while and then decided it was time to go somewhere else before our ears started to bleed from how loud the music was.

We ended up at a little Scottish Bar that I can not remember the name of, but was very nice, it looked like an old English pub and we sat at the bar and relaxed for a bit. Surprisingly we were the only white folk there. 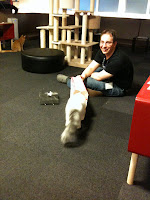 We were going to go home after the Scottish Bar, but on our way to the subway station we came across a Cat Cafe! We got to pet kitties! There are these places all over Tokyo. You pay a set fee for an hour of cat petting fun. The cafe we went to had 15 cats out spread out across 2 floors, so there was lots of room. We wanted to pet all of them, but as we all know, cats are fickle and it was midnight, so they weren't very friendly. We still had lots of fun with the kitties.

After the kitty petting we decided we were going to pull an all-nighter in Shinjuku and bar hop until the train started up again at 5am. We went to another tiny little bar down a back ally called Due where we made friends with the bar tender and the two other patrons of the bar, a nice Pilipino girl, and her "boyfriend" a nice Japanese woman. We KARAOKED with them for a couple of hours and had such a good time! It was awesome. And because it was just the four of us we all got to sing a bunch of songs, Bob even sang. He sang some Sinatra and some Weezer for us. 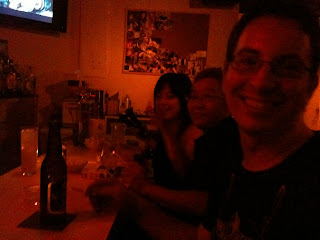 We picked up some rice triangles with salmon in them at the 7-11 around the corner from the bar and nibbled on some treats and then started looking for another place to go.

We ended up at our next bar at around 3:30am, and ended up at another tiny little bar, where we had some squid served to us. The lady who ran the bar looked like she was done for the night so we only stayed for one drink. After that we walked around for a little while and looked at things until we ended up at another Scottish/English bar that was showing a soccer game. We hung out there until the sun started to come up. 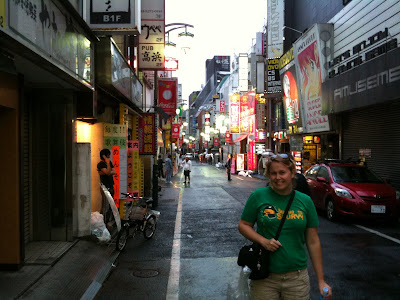 We walked our tired bodies towards the train and stopped at a little food place called Yoshinoya for food before we got on the train. We were in bed at 7am. It was a long night. We slept until 3pm.