So, in an effort to become "Starwood Gold" members (because we traveled so much last year and the beginning of this year) Bob and I decided we should go to Hawaii.  That and because, why not?  Anyway, Bob previously lived on Maui for a short while when he and Jameson were putting together what would one day be MochiMedia, so we returned to his island paradise to stay at the Westin in Lahiana.

We arrived in the early afternoon, and picked up our lovely white four door Jeep Wrangler for our island getaway and were shortly on the road.  As a side note, I once considered purchasing a Jeep because I thought I was cool, after having driven one for the last four days I'm happy I didn't get one, at least not a four door, as it was massive.  The Jeep was very comfy, and turned out to be great in Maui - more on that later.

The Westin was pretty swanky, and we had an awesome view of the ocean.  Nice pools outside with a dedicated "adults only" pool, which I always appreciate - because I want to be the only person doing canon balls into the pool. They also had a Luau every few nights, so we signed up for the Luau that night so we could immediately get immersed in *cough* culture *cough*. But lets not get ahead of ourselves, first we went for food! 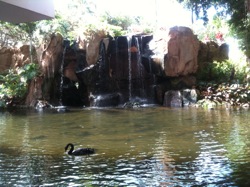 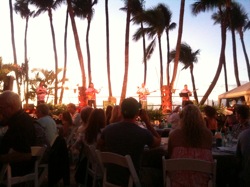 We ended up wandering over to Whaler's Village where there's a small shopping complex and a few different places to eat.  We checked out "Cane and Taro" for lunch, and were pretty satisfied with our choice.  If you'd like to read more about what we ate at "Cane and Taro"  you can check out my food blog.  After lunch, and a nice helping of Maitais, we wandered over the local convenience store to pick up sun screen.  No Lobster Girl for me on this vacation!  We then promptly took a nap, well Bob napped, I worked.  We still needed to get some things done before the partying could commence.  (And we only had 2 hours between lunch and the start of dinner at the Luau.) 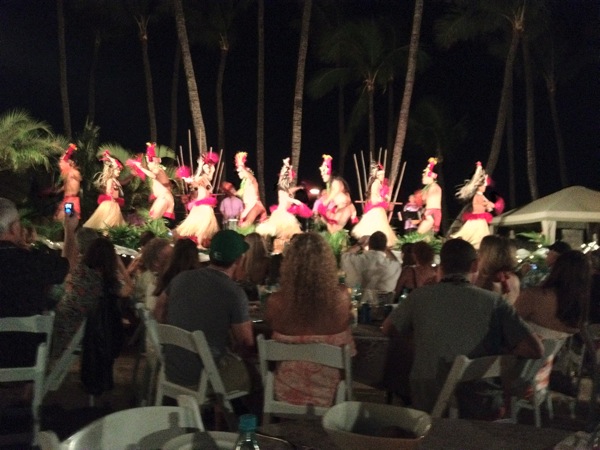 We promptly got in line for the Wailiee Luaua at 5:15pm and were given fairly strong maitais to get us going.  We sat with Maria and Frank, from I can't remember where, and two nice Australian peeps.  We did't talk with the Australian couple much, so I've forgotten their names, but they were nice.  The show was pretty much what I expected, there was hula, and some fun tribal chanting and at the end there were people throwing fire crazily into the air like madmen!  I had a wonderful time!  As a back story, I had previously been to Hawaii when I was much younger and had attended a Luau with my family, unfortunately I had strep throat at the time so I look miserable in all the pictures.  I don't look miserable in these pictures!

We were so wiped out from the Luau and all the drinks they kept giving us that we called it a night at 10:30pm - in our defense it was after midnight in San Francisco.  The good news is that we did wake up early the next morning and took advantage of the breakfast buffet at the hotel.

After our nice breakfast buffet, which was okay, we decided we'd drive over to see where Bob previously lived in Kihei and then continue along the road to the most southern point of Maui where there's a Lava Beach.  Despite Maui being a relatively small island it takes a long time to get from one place to another because the speed limit is typically 35MPH, sometimes slower.  It was a nice drive, we got to see a lot of little residential areas along the coast.  Sadly we were unable to see Bob's old house because it's in a gated community - he failed to mention this to me prior to our departure.

We drove out way along the coast until the road ends where the Lava Beach begins.  I'm sorry I didn't take my tennis shoes with me, and a change of clothes because I really wanted to do some more exploring on the rocks and in the little tide pools, but my sandals were not the best for wandering around on rocks.  We'll have to go back.

We stopped in Kihei on our way back for lunch.  Bob had remembered there being a place that had the most amazing calamari, we were sad to find it was no longer there.  Instead we had fish tacos at "Life's A Beach."  It was a fun little hangout/bar and it looked like it would be hopping at night.  I didn't do a post on the fish tacos, but they were good.  I'd never had fish tacos before and I feel like these were a nice way to ease me into them.  They were battered and then in soft taco shells with delish salsa and some guacamole.  We split the fish tacos because we planned on eating an early dinner at a restaurant near our hotel that had excellent reviews....and we both wanted to drink at dinner.

While in Kihei we checked out a small open air market and I ended up buying some excellently ugly convertible dresses/skirts.  I figured we were in Hawaii so I should have some Hawaii fashion, which is to say, I should look like a tourist trying to fit in with the locals.  We also stopped and had Shave Ice!  OMG delicious!  We stopped at Local Boys Snack Bar and had the "Patriot" which was strawberry, blueberry and coconut shave ice on top of ice cream and with sweet cream on top.  It was sooooo good, we practically licked the bottom of the bowl when we were done.

We decided to head back to the hotel after our shopping excursion so we could play in the ocean.  There are no pictures of us playing in the ocean as our camera is not equipped to handle that.  Oh well.  We played in the ocean for a while and then hosed off and lounged in the "adults only" pool and had pina coladas.  It was a really nice lazy afternoon.  We then prepped ourselves for an amazing dinner.  We had made reservations at Son'z Maui at the Hyatt hotel.  Yes, this is a hotel restaurant, but you're going to want to go here because it was amazingly delicious!  You can read all about our wonderful dinner on the food blog.

After our gigantic dinner, we moseyed along the beach back to the Westin.  Because of our heavy intake of maitais, it was again an early night for us, and we were sound asleep by 9:30pm.  What can I say, having fun in sun makes us sleepy face when mixed with booze.

Stay tuned for days 3 and 4, you're not going to want to miss this!