Naked In LA For My Birthday

(Yes, this is a month old, but that's okay!)This year as an early birthday gift my friend Suzanne (Zan) planned a trip LA for us so we could visit a Korean spa.  That's right, I flew from San Francisco to LA to hit K-town and have an awesome time.  It also happened that we were there for St. Patrick's Day, which was an added bonus.  Zan knew that I loved my spa experience in Shanghai and she's visited WiSpa in LA enough times to know I'd also love it.  We flew down to LA on Thursday, March 15th so that we could spend all Friday at the Spa lounging about and wallowing in the hot pools.  Zan's awesome friend, and my new awesome friend, Michelle picked us up at LAX and we arrived at the Westin Bonaventure at about midnight.  Silly us, we had booked a weekend in LA during the LA marathon, who knew? (Not us.)  The hotel was packed but we still had a really nice room on the 14th floor with a great view.  We grabbed a drink in the hotel bar, and went to bed soon after so we could be well rested for our day of relaxation. 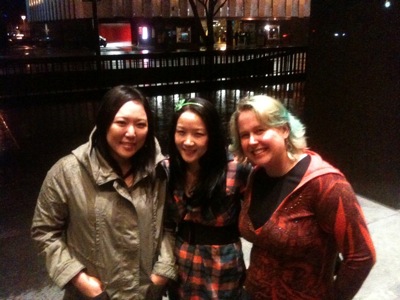 And what a relaxing day it was!  If you ever have the chance to go to a "banya" or Korean Spa, do it!  Lounge about in the nice warm pools and sign up to get a "buff."  A buff is when you get a full exfoliating body scrub, you'll feel sparkly and clean when all is said and done.  Zan and Michelle and I chose to also add a seaweed wrap.  I'd never had a seaweed wrap before but it's awesome and you get to feel like a giant sushi roll!  They slather you down with a seaweed paste and wrap you in tin foil to bake the seaweed paste onto your body.  I was so smooth and shiny afterward and felt ridiculously clean.   We pretty much spent all day at the spa relaxing in different saunas and pools.  Plus Wi Spa has an awesome Korean cafe where you can order great tasting food. 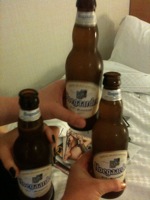 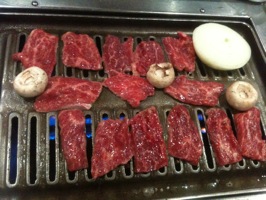 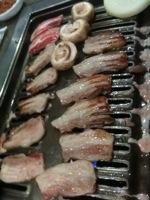 After our day of relaxing we went back to the hotel and lounged about working up an appetite for dinner, and I'm so glad we did.  We went to a Korean BBQ called ChoSun Galbee and it was absolutely mouth-wateringly delicious!  We ordered way too much food, and stuffed our faces like there was no tomorrow, but we loved every minute of it.  Go here, order the pork,  "daeji bulgogi" it is absolutely heavenly.  Go with a couple of friends so you can order more and try a whole variety of food.  If you've never had Korean BBQ, you need to remedy that immediately, you'll be pleased you did. 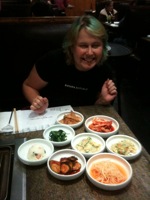 The next day was St. Patricks Day, and we played it low key.  Michelle had a wedding to attend, and Zan and I were prepared to be lazy all day.  We succeeded in leaps and bounds.  We shopped about in the hotel, there are some excellent quirky little shops in the Westin.  We checked out the revolving restaurant/bar/lounge at the the top of the hotel, that was fun.  And then we relaxed, because our day had been so hard so far, with a couples massage at the Spa in the Westin, the Bonaventure Club and Spa.  I had an amazing massage, and the woman actually walked on my back.  If you go there, ask for Daisy, she rocked!

We had grand plans to get our drink on that evening but it was raining ridiculously hard so we partied at the hotel in their club, Suede.  It wasn't too bad - tiny, and some weird videos to go with the music.  But it was convenient and we had a great time dancing our butts off all night long.  (Maybe too much fun, but we won't go into that.)

The next day Zan and I had to head back to San Francisco.  We stopped at Hodori for some more korean food before heading to the airport.  (Hodori means tiger in Korean, AND it was the name of  the 1986 Olympic mascot - just in case you wanted to know.)  We had bibimbop and other yummy things, like kimchi.  I love kimchi!

It was a short trip but I had an awesome time!  I cannot wait to go back to LA to have fun with Zan and Michelle again!