Holy Peeps and Chocolate Bunnies Batman!  It's been forever since the blog has been updated and there's so much to share!

Last time on Margaret On The Go, Bob and Margaret were heading to magnificent NYC to party hardy and geek it up.  It was a really great time.  We split half the time in a super swanky hotel, Andaz, and an Air BNB studio apartment in the East Village.  Bob knows the most super cool Spa Manager at Andaz so we got the royal treatment, if you've never had a bath in a square bathtub you are truly missing out, it's amazing.  The night we arrived we ate at the hotel restaurant Wall & Water (also the name of the cross streets) and we had the Chef's tasting menu with wine.  We had the most amazing duck salami ever, it was truly succulent and delicious.  The entire meal was very good, and the wines really did go great with each course, we were completely stuffed at the end.  I don't have pictures because it was a really dark restaurant.  Cool fact about the restaurant.... the ceiling is a giant $100 dollar bill.

I'm going to try to update the BiCoastalBites blog with more food information otherwise this post will be ridiculously long.  But just as a little run through, we had: Tiny's Giant Sandwiches, Rice, Berekat, Keen's Steak House, Inotecca, Lazaro's Pizza, Peri Wine Bar, Cien Fuegos, Crif Dog and various other delicious things.  One of the other places that stands out in my mind was a place called The Fish Market, this place stands out in my mind because Bob and I had dinner there with Holly, and I had my first experience pulling apart a lobster to eat it!

As you can see from the photos above, I like lobster, it was awesome!

We also managed to make it over to Brooklyn to visit one of Bob's friends, Amit.  We went to the Williamsburg area and had lunch, and walked about.

I was pleasantly surprised by how nice and sunny it was in Brooklyn.  I could hang out there more often.

One of the best parts of the trip though was going to see "The Book of Mormon" The Musical, it was truly fantastic.  Bob laughed the whole way through, and the songs and the dancing were just wonderful.  We went to the show with Rich and Vivianna, and got to see their beautiful apartment afterwards, that's some stylish living right there.  But back to the musical, you should see it, it was amazing, buy the music as soon as a recording is made.

We went to a bunch of really cool little bars and speakeasies, most notably one called "Please Don't Tell."  So it worked like this, you walk into a hotdog cafe, and on the left there is an old phone booth.  You step inside the phone booth, and use the old rotary dial telephone to dial one number, and then a woman opens the wall on the other side of you!  I felt like I was in the Untouchables, it was awesome!  They had some really good cocktails.  We went there with some of Bob's other friends, Jon and Evan, and then picked up Geoff at Ace Bar after our secret cocktails. 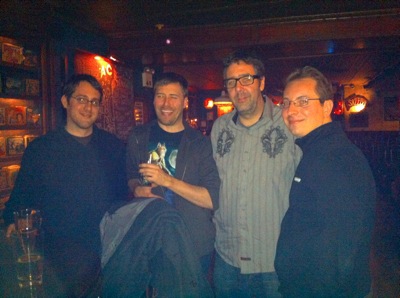 Bob has some excellent taste in friends, the guys were all super cool, and I was blown away by all their amazing job stories.  Seriously, these guys are rockstars.

I'm going to be putting all my pictures from NYC up on my Flickr account, and will make sure to have an update with a link in the next post.

This is going to be an abrupt ending to this blog post because well I need to actually catch up with what's going on.  I'm in the process of organizing all my photos and getting my timelines correct.